An Anniversary Getaway Just Down the Road

Our dogs go away with us for our anniversary. Don’t yours?

It was our 3rd wedding anniversary, and in our true getaway-spirited style, we celebrated it in our favourite way. We escaped to somewhere lovely, with our dogs of course.

Since we already live somewhere lovely by choice (in Hartbeespoort’s countryside), and since we only had one night to stay, we chose to save ourselves the travel time and go somewhere close by.

Just 5kms away from home to be exact.

We went to a little hideaway around the corner called Iris Retreat. And it was perfection. 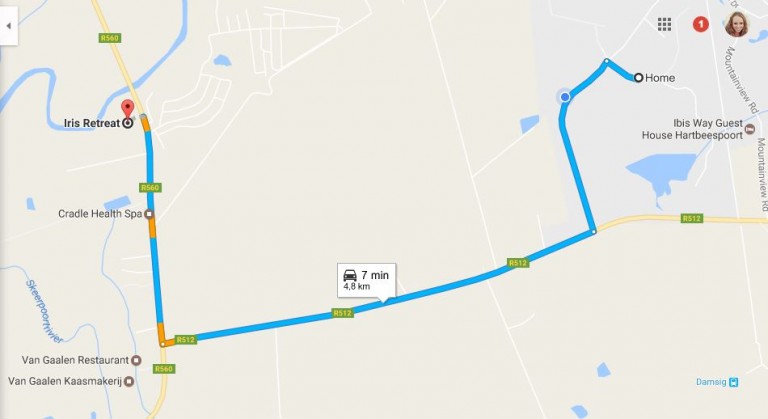 Just around the corner. Literally.

Yes, it may sound a bit mad and some may ask, “what’s the point?” but why should only out of town visitor get to enjoy our pretty surrounds? We live somewhere lovely and it can’t be taken for granted. I don’t want to miss out on exploring it just because it’s technically “home”.

After work on our anniversary day, we vaulted into the Patrol with our overly keen pooches, Moose and Penny. They realised we were going somewhere special when they saw us packing in their luggage as well as our own. They’re not just cute faces. Just a few panted doggy breaths later we were already there, being welcomed to our self-catering little cottage within the trees and balancing on the banks of the Magalies River. 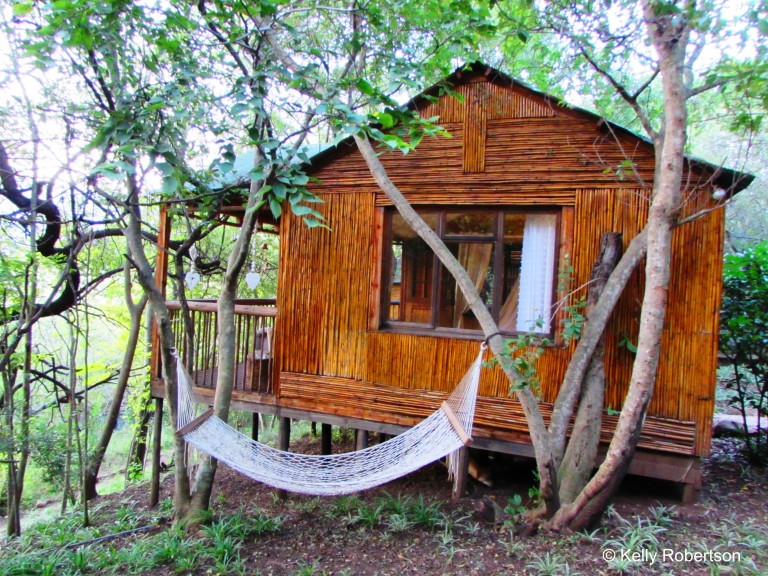 A bamboo cottage in the trees. So inviting.

Christine is the hands-on and wonderfully hospitable owner of Iris Retreat,  she personally greeted us and asked to meet “the rest of our family” as she called our dogs. We liked her immediately. The pups steamed up the back window of the car with all their sniffing, waiting patiently to be set free to explore. And explore they did. 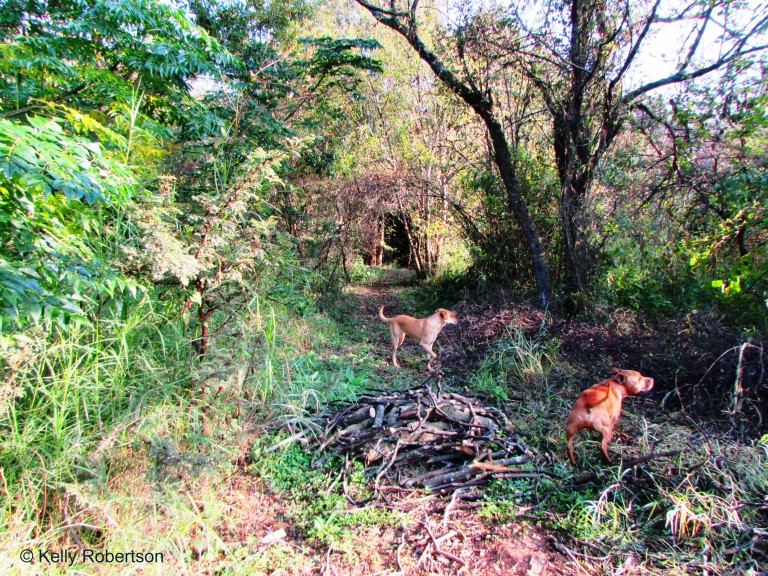 The retreat is named in memory Christine’s mother and there are 4 cottages on the property, crouched in the thick bush, each with privacy and tranquillity naturally at heart. A chalk board sign in front of our cottage welcomed us by name too while the friendly Jaffet helped us unpack our stuff as we made it our home for the night.

Our cottage, with its bamboo character, was aptly named “Riverside” and we gazed out at the water from its little veranda. It had the feel of a treehouse because of its setting above the riverbank and in line with the indigenous branches which intertwined along the water’s edge below. Inside it, a super King size bed, fat with duvets and a lace mozzie net curtaining it, beamed at us as we anticipated our comfy sleep to come later. In summertime I’m sure the air conditioner is very welcome too, but we had no need for it on that nippy April evening. Rather, in front of a wood fire was where we made ourselves comfortable in our private garden. That fire was expertly and unexpectedly made for us by Jaffet. We were continuously surprised by these small acts of luxury and hospitality in this unpretentious and homely place we had found. 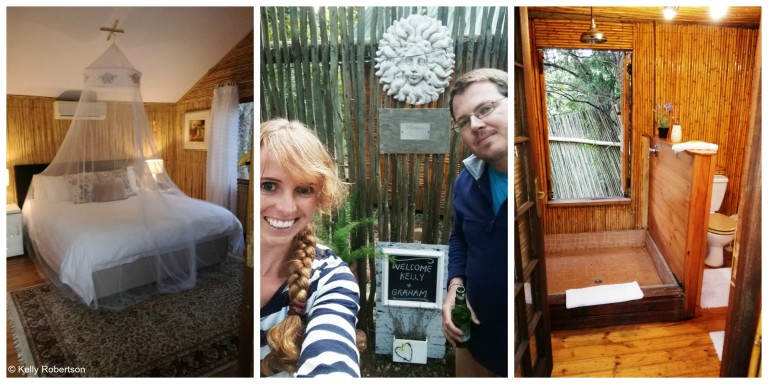 Details and comforts at our Riverside Cottage.

Play Time Down at the River

Before we settled in for the night beside the fire and braai we chased the sunset and explored. With sundowner drinks in hand we were led by the doggies along the riverside paths set out on the property. They bounded and waggled tails and jumped in and out of the water at each spot which allowed them access. Penny fetched sticks thrown in for her and brought them back to Moose to shake, as is their practiced tradition.

She negotiated rapids (her first ones ever encountered) while Moose worriedly looked on from his non-swimmer stance on the bank. Their playtime was pure freedom and bliss and mirrored our own happiness at being in one of our favourite kind of settings. We had instantly relaxed into this easy flowing way of life.

In the morning, after a lazy breakfast next to the river, we walked the short paths again and there was a lot more bouncing and joyful play to be done by the dogs. They were in their element and its one of my most cherished things to watch. We whiled away a few final moments at the beautiful Iris Retreat pool, where we played some more. The area is like something out of “The Secret Garden” story. The grounds are really so inviting. If it were a warmer morning and we had more time to spare I could see myself setting up camp there for the day, armed with a picnic blanket, swimming towels, wine and a good book. Maybe next time, since I fully expect to be a regular there at our new local retreat. 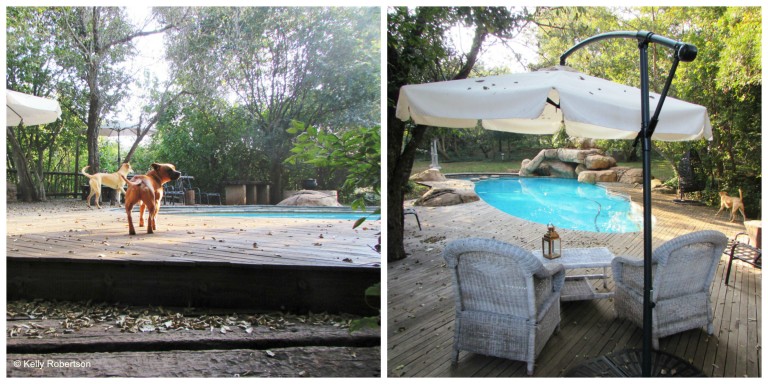 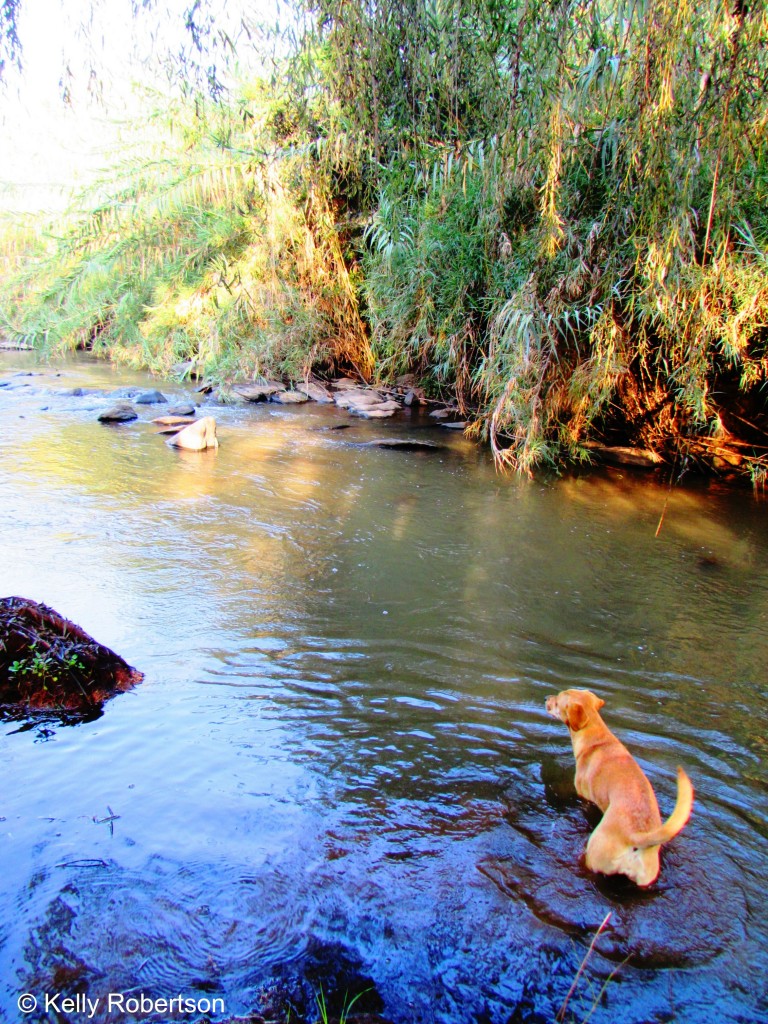 Water babies, playing in the river

It’s in the little things

Riverside cottage was idyllic in a nature-ruled setting we could relax in and just be. Our exclusive-use kitchenette and bathroom were each placed in their own cabins, complete with little luxuries and surprising personal touches to them. Towel warming rails in the bathroom and leaves decorating the folded facecloths, a coffee plunger in the kitchen and pretty detailed candle lanterns dotted all around the living areas along with a hammock which gently called to us from where it hung. One of my favourite characteristics belonged to the shower with its enormous shower head and outdoor feel to it, even though we were technically inside the bamboo bathroom when using it. The windows opened up fully all around it, with the surrounding trees keeping things private and the birds making their presence known from behind the leaves. I do love an outdoor shower and this one had the best of both worlds to it. 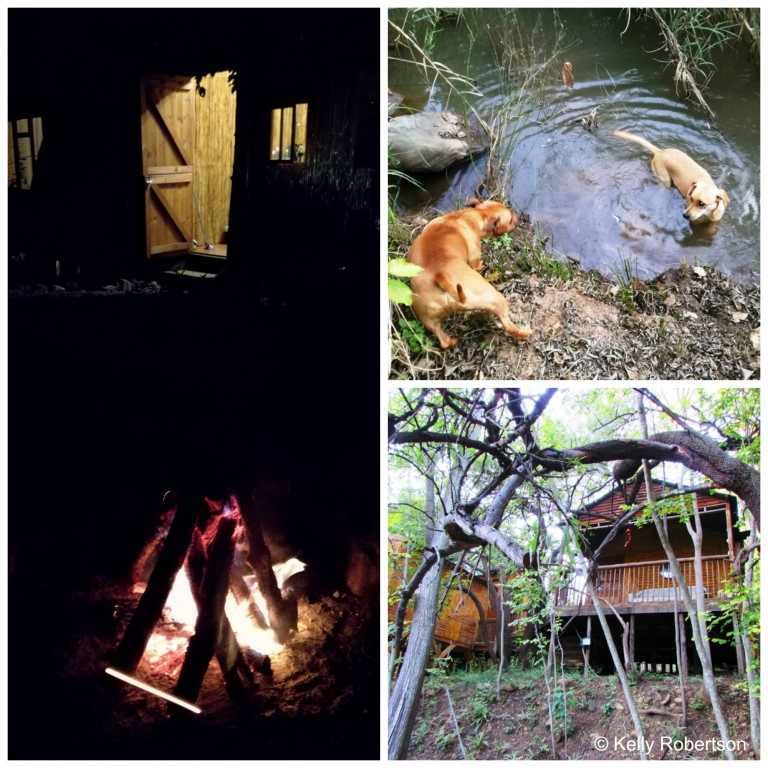 Even though we only had a few hours to spend celebrating in this way and for this reason, it was just right. Quality time. Good for the heart and soul. Our way to mark our special occasion together. It was another memorable anniversary, spent in the kind of way we love best and including our holiday-loving dogs. Isn’t it nice to live somewhere lovely, with places like Iris Retreat just down the road? 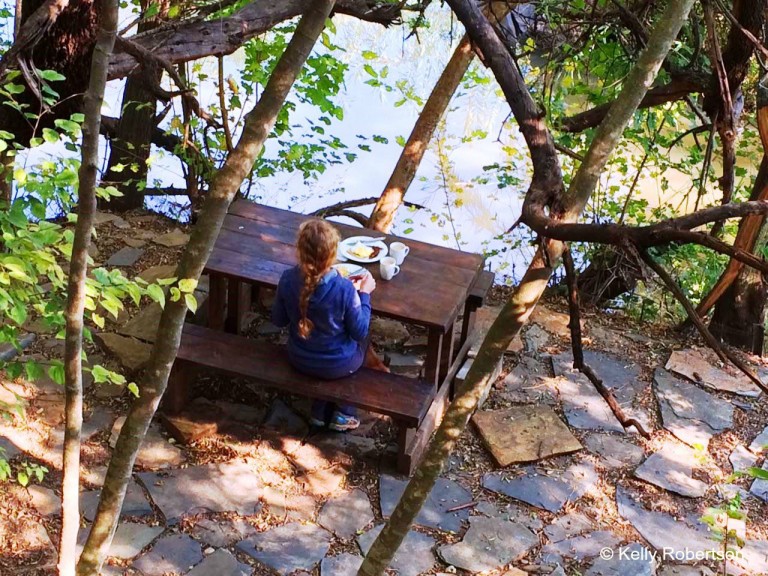 Breakfast spot with a river view

Cost: R650 per night in Riverside cottage, when we stayed.

Ask Christine for info on the others and to check availability.

← Durban is Always a Good Idea
My KZN on Instagram →