*Catch up on an overview of our trip and highlights from Day 1 and 2 in the blog series Part 1 and Part 2.

250kms onwards up that A33 and we were in Kasane, just moments away from the wildest part of our trip and where it all really began for us. Chobe National Park beckoned to us.

After refuelling (jerry cans too) and stocking up our camping fridge with meat, fresh veggies and bottle store beverages bought from one of the Kasane shopping centres, we were set for the next 5 days inside the park. 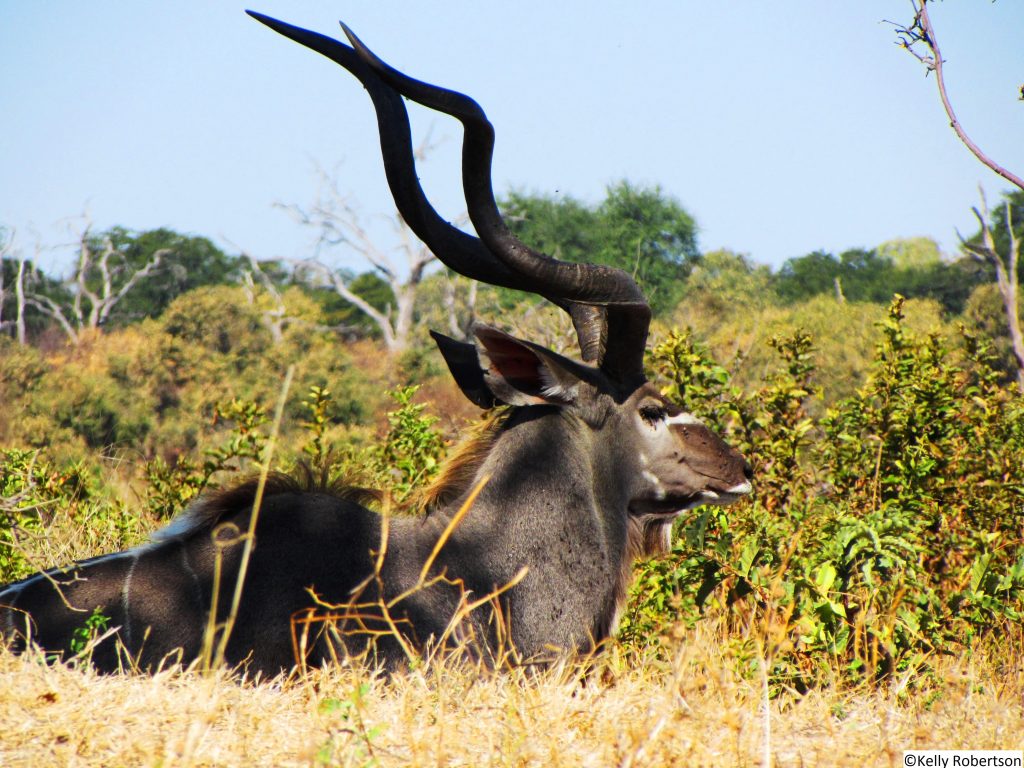 We entered Chobe at the Ngoma Gate and were dipped immediately into the beach-sand-like trail which we “rocked and rolled” along towards the floodplains. Suddenly those Chobe River floodplains filled our windscreens, dotted with animals. There were so many of them, and all sorts. It was like they had all come out to say, “Oh good you’re here. We’ve been waiting for you.” Binoculars were out and fat smiles were plastered onto faces as we continued the 23km game drive to Ihaha campsite. 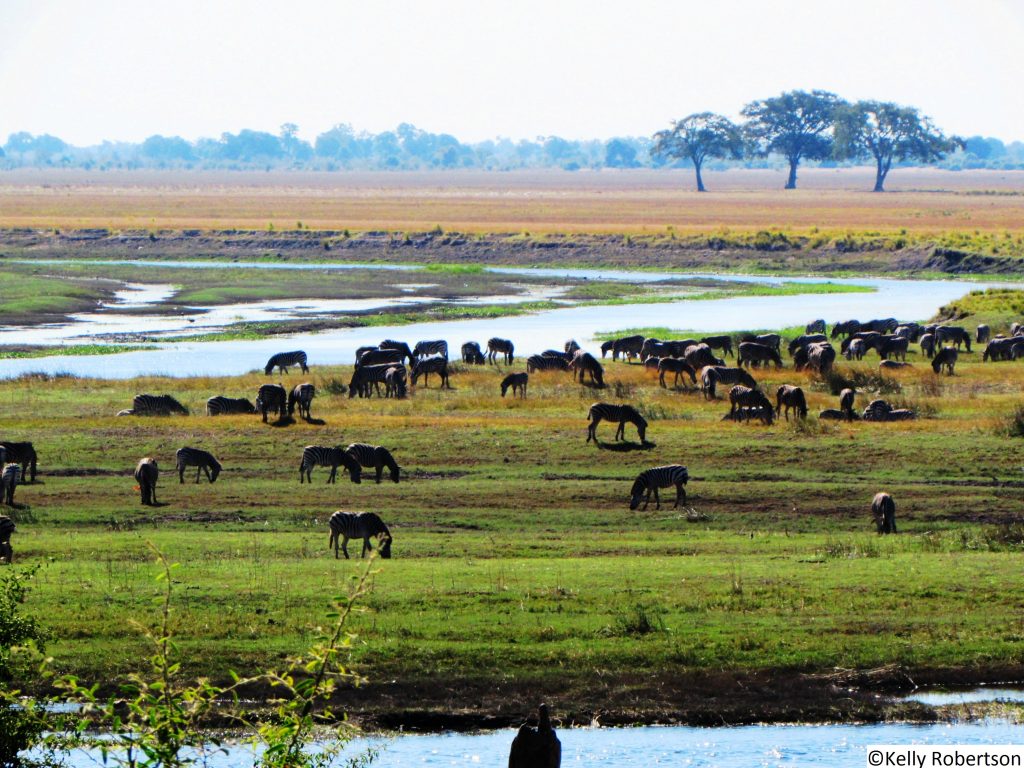 Chobe really is a “super park” and every natural thing that calls it home, thrives there in abundance. It is the park of plenty. Plenty of baobabs and vegetation, birds and buck, plains game and predators. And plenty of elephants.  We saw loads of Chobe’s residents on that first drive. The local fish eagles welcomed us with their calls, which would come to define what Chobe ‘sounded’ like for us over the next week. An enormous migratory herd of zebra munched on the grass next to the thin water channels of the Chobe River, gigantic crocs suntanned on little islands; all sorts of storks (black, marabou, saddle-billed and yellow-billed) fished and wallowed in the puddles. Bee-eater birds flew over in their colourful bursts; giraffe journeyed from tree to tree next to the road near kudu herds and vultures circled, almost lazily in their easy grace in the big blue sky. 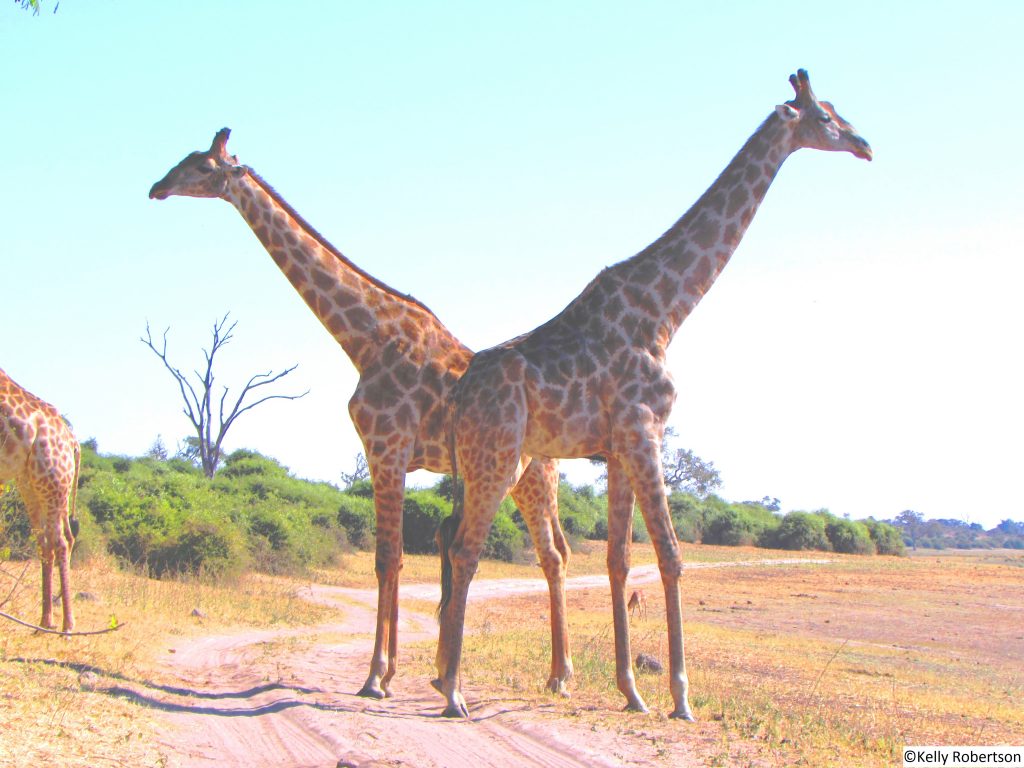 We checked in at Ihaha and heard about all the unbelievable big cats that had been seen in the area recently. With eyes wide with anticipation of what could be in store for us, we set up camp at site 2 (The best site, in our opinion) and felt as if we had that wild place all to ourselves. We shared that campsite with “Rafikki”, the big boy baboon who strutted through from time to time and managed to help himself to some breakfast snacks…twice. He was king of that campsite. It is set under an enormous tree, and we felt at home there for the next 3 days. 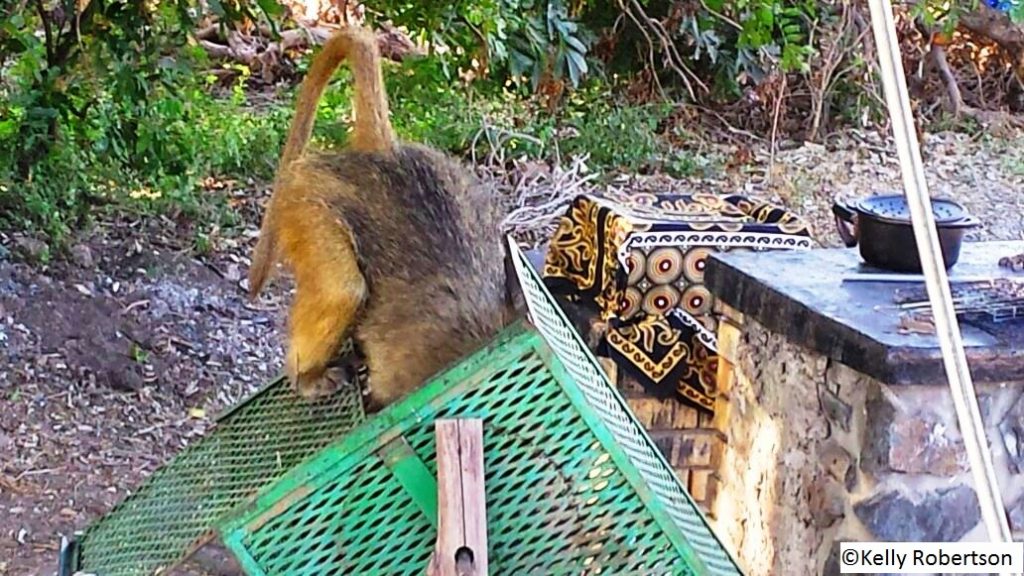 Our view was of the Chobe River and Namibia’s Caprivi Strip on the other side of it. On its waters we occasionally noticed and waved to Namibian fishermen, as they masterfully cast their nets from their mokoro boats, so perfectly part of that scene without making it unnatural. That night was dominated by shooting stars, hyena calls and lion roars so close by that they rumbled in our ears and cut a midnight bathroom break next to the car short for one of our party and sent him bounding back up the ladder and into the tent.

On our first morning in camp we shared our skottel breakfast time  with a family of banded mongooses, as they chattered while digging and eating their fill from what lay beneath the sand around us. The birds were out on their morning errands too. The little blue waxbills (a favourite of mine) were dubbed the “Cinderella Birds” by my dad as they look like they‘re out of an animated Disney movie, ready to help a singing princess tidy up her house. We also met the enormous resident likkewaan (monitor lizard) who lived in a chamber in our camp tree. He slept away the day there (and every other day too) with his nose out one tree hole and his tail out another. 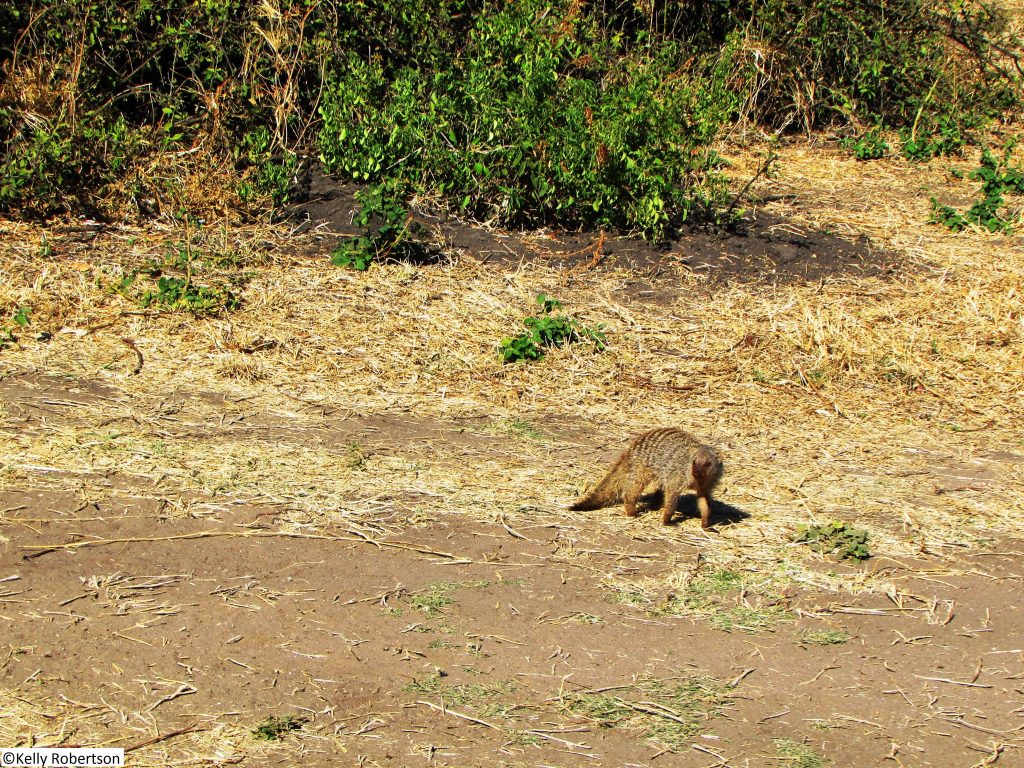 All 4 of us clambered into Priscilla the Patrol for a slow game drive afternoon. We traversed along the riverside road in the direction of Serondela picnic site, taking it very easy and stopping often to meet and greet all the animals we came across. Iconic red lechwe antelope waded in the river with hippos nearby and ancient dinosaur-like crocodiles catching some rays on the banks too. We sat in the shade of a tree watching elephants drinking and wandering by and drove back to camp, stopping often to inspect buffaloes, warthogs and big herds of giraffe passing by our windows. 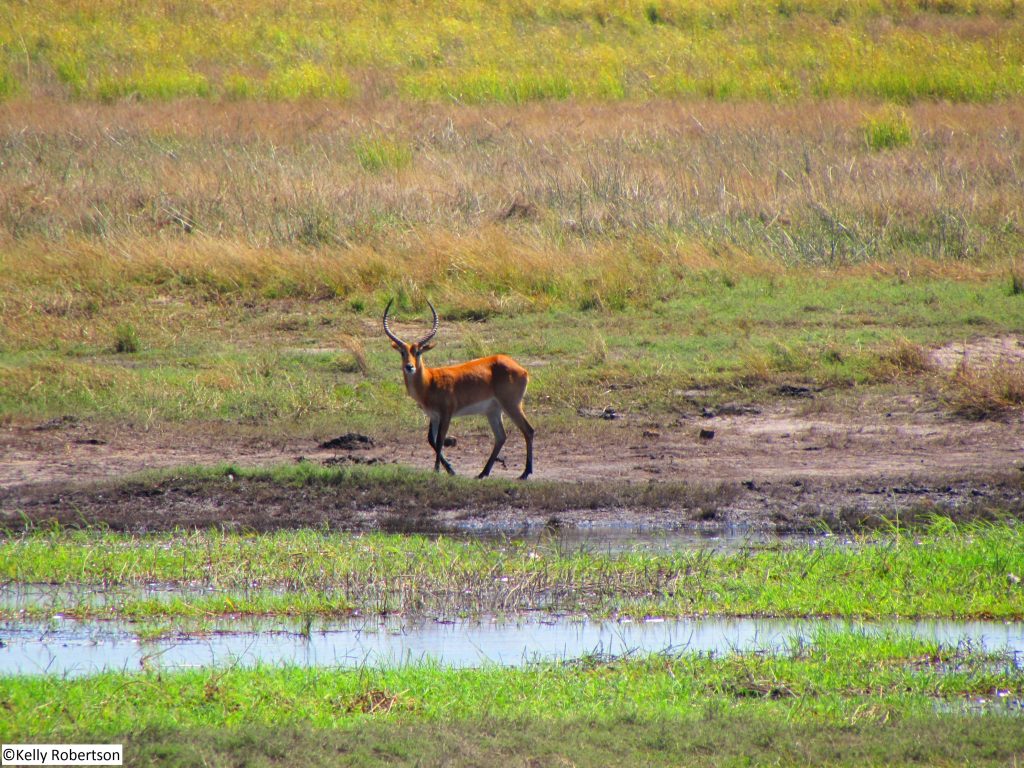 At camp we showered early as the ablution blocks are not places to be visited after dark. Just ask the lions who left their paw prints next to the ladies’ bathroom entrance or the leopard that made a kill just beyond the dishwashing area a few days before we arrived.

We toasted the sunset on another “tough” day in Africa. This was “game drive day” for Graham and I, while my parents chose to take advantage of a slow and wonderful day in camp, where nature just played around them as they watched and relaxed within it. 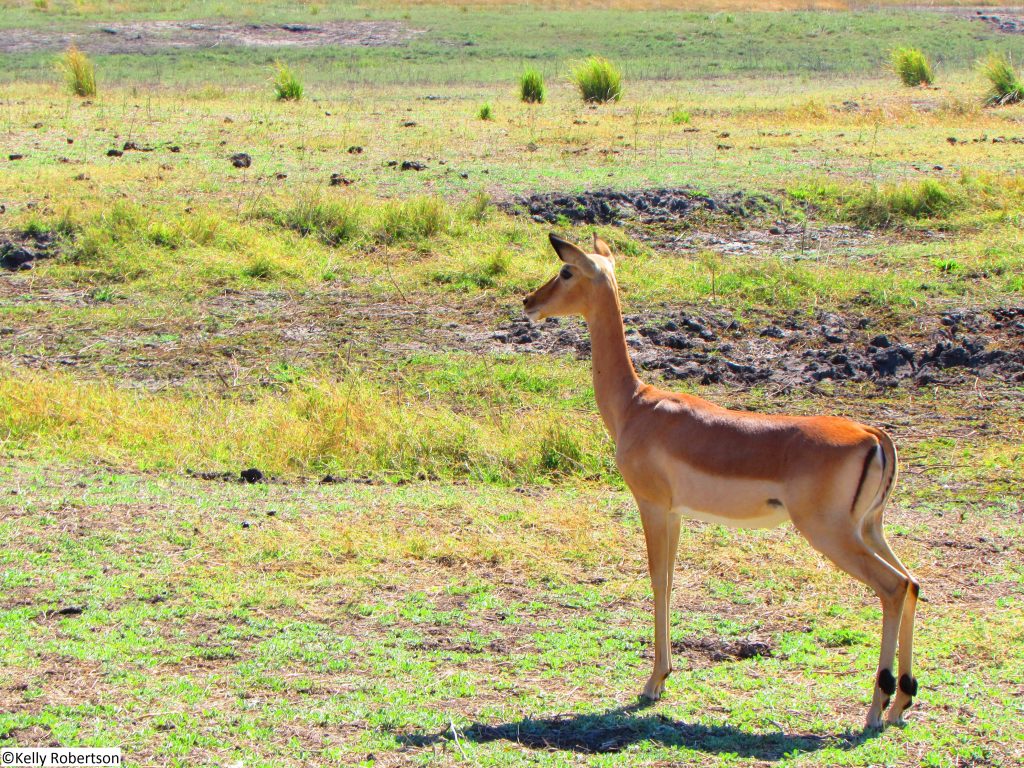 Our drive was 40kms each way as we explored the riverside road in full, all the way to the park gate and then out into Kasane to pick up a few supplies and to quench Priscilla’s massive thirst some more before returning to camp the same way. We love that river route and so do all of Chobe’s wildlife. Just 2kms into our drive, we spotted a few very sleepy lionesses in the shade. They were definitely part of the pride we had heard roaring the night before and they had been THAT close by. The rest of our drive brought us face to face with some new characters such as huge herd of buffalo (hundreds of them), big birds of prey including bataleur and martial eagles, vultures of all sorts including a favourite of ours- the lappet faced vulture -and ellies and more ellies playing in the mud, water and bushes. 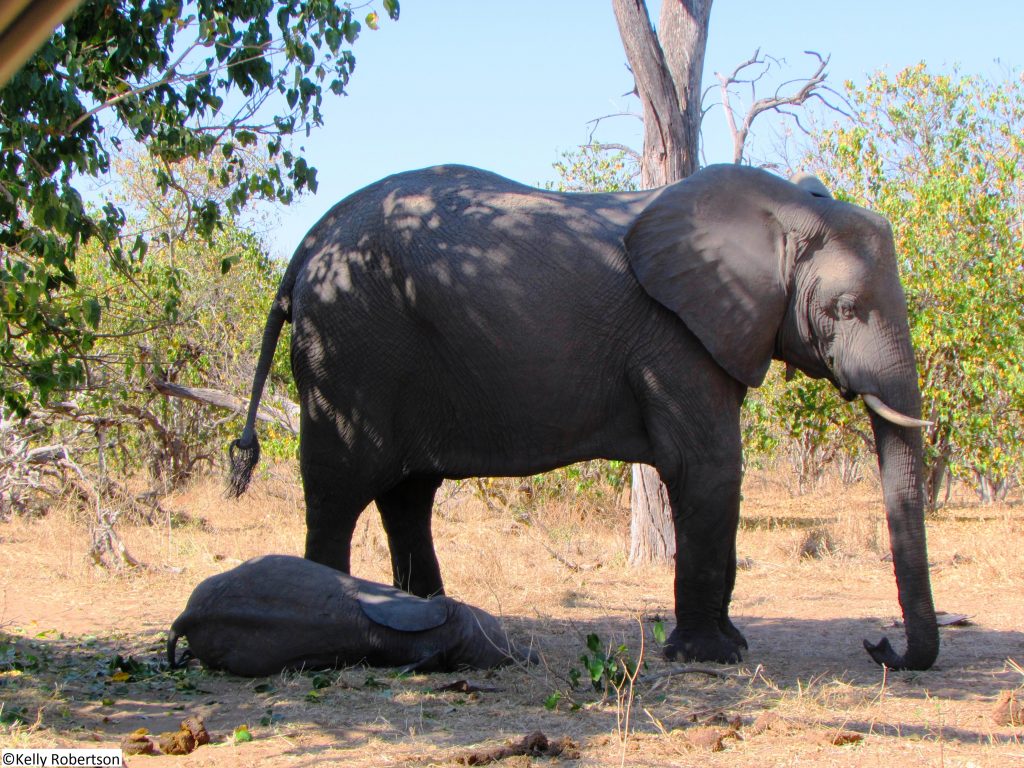 Nap time in the shade. An elephant mom and baby snooze in Chobe National Park 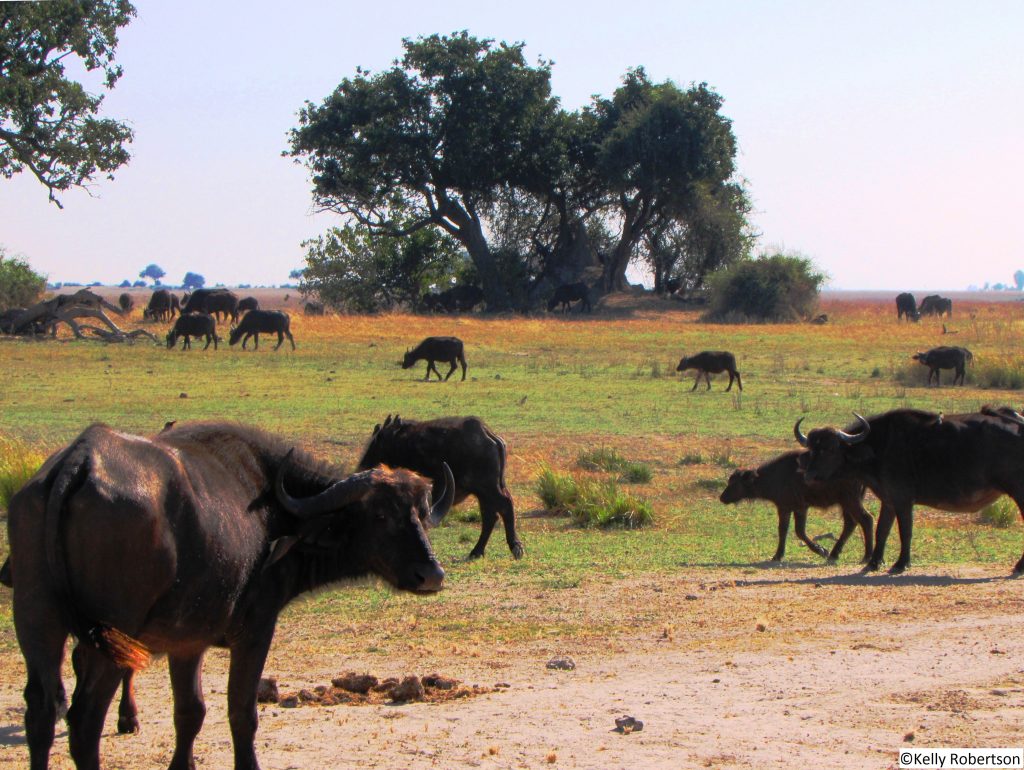 Part of the big herd of buffaloes, Chobe National Park

One memorable elephant moment we witnessed made us giggle. A tiny baby elephant had the biggest personality on the riverbank that day. His gusto for life was contagious as he drank and played in between his herd. Suddenly, he realised he could no longer see his mom and panicked, trumpeting he slipped in the mud and rushed towards his family as they all turned to meet and console him. It was so endearing. It is an elephant’s life in Chobe. Sundowners with the pride

Near to camp we saw 3 of those same lionesses we had met that morning, still 2kms or so from Ihaha. We fetched my parents from camp with the news of “lions!” on our lips. We packed some drinks into a cooler box and headed back out to where we had just seen those sleepy girls. The scene had changed dramatically and it was now something out of a safari fairy-tale.  The lions were awake and coming out of the bush and into the setting sunshine, ready to enjoy sundowners with us. As more and more came into view we couldn’t believe what we were seeing. We counted 15 lions in that family pride (but were told that 18 in total were around), all females and cubs of different ages. It was a “pinch me if this is real” kind of experience as we shared sunset with the lions. The cubs played around the cars, so cat-like in their antics and so full of curiosity. The moms were having a harder time waking up compared to the youngsters as they yawned and stretched and lounged about while the babies tumbled around them. They moved down to the water to drink, and pounced and played some more with a few of the cubs showing real interest in the grazing elephants over the river too. We clinked our drinks in celebration and awe of the moment and setting we found ourselves in. It was the best bush sunset we have ever had. 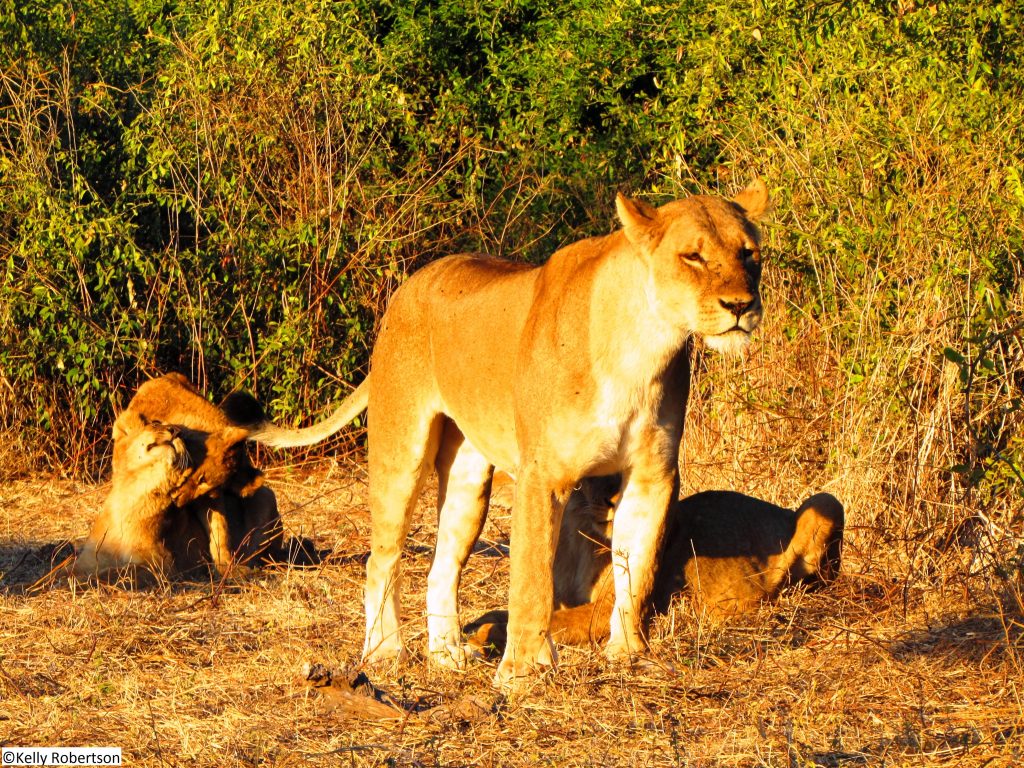 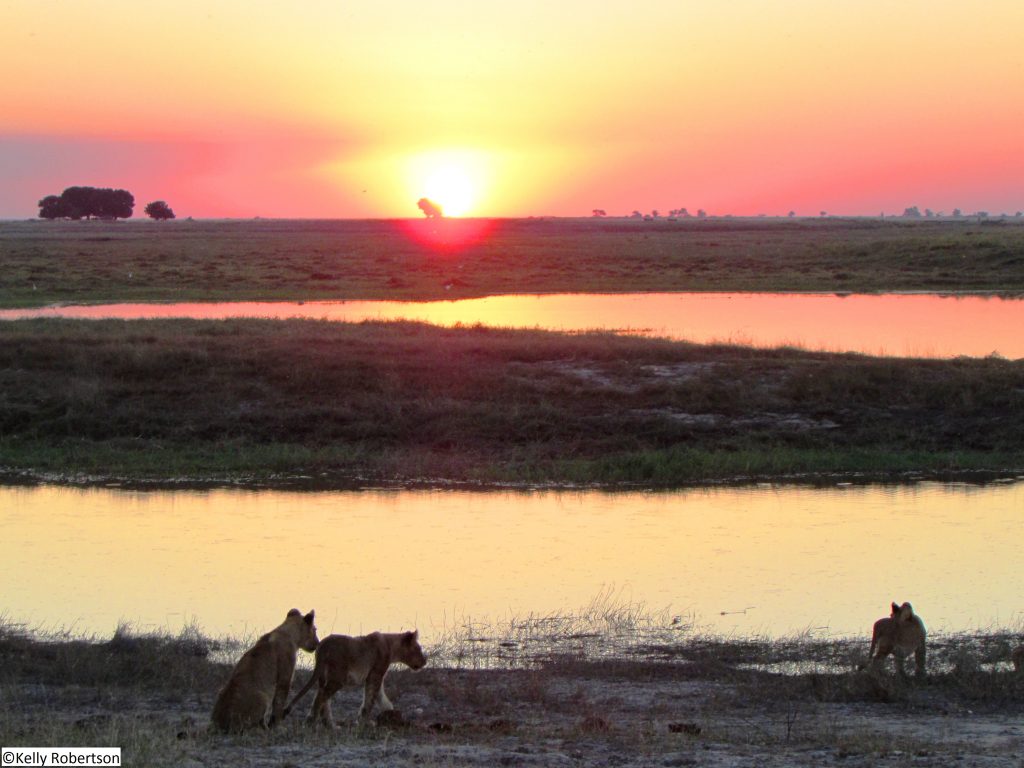 Cost of camping: P200 per person Read more about our route, tips and an overview of the entire trip in part 1 of this blog series here and then all about our first 2 days at Nata and Elephant Sands in part 2 here.