We switched directions and safari style on day 10 as we traversed from north to south this time. Our route roved from Dizhana Camp towards Maun and onwards through the Nxai Pan area and then to our destination for the night: the quirky Planet Baobab, just outside Gweta.

A fuel, shop and lunch stop in the chaotic but charismatically African city of Maun broke our safari daze this day. We hadn’t seen that many people, cars, goats and donkeys since the beginning of trip and it was quite the culture shock compared to our serendipitous wilderness settings of the days gone by. A little frazzled we continued our road trip from town and into the vast, flat Botswana landscape again.

We made a mental note to return to that Nxai National Park region we saw through our windscreen with its gemsbok, ostriches and baobabs peeping at us as we went by. The iconic, bizarre and enormous clay aardvark greeted us across from the entrance to Planet Baobab, a landmark we couldn’t miss. The place has an artistic heart, ruled by an eye for pretty African décor detail and guarded by giant baobabs.  It’s a good overnight stop on the way to or from the Makgadikgadi Pans.

My folks stayed in a rondavel hut style chalet this night and gave their tent a rest. It was en suite and interestingly decorated with African flair. Graham and I camped and were very much at ease on our big stand with its thatched boma area near the braai. The ablutions were just lovely and the eye-catching décor was present inside them too. 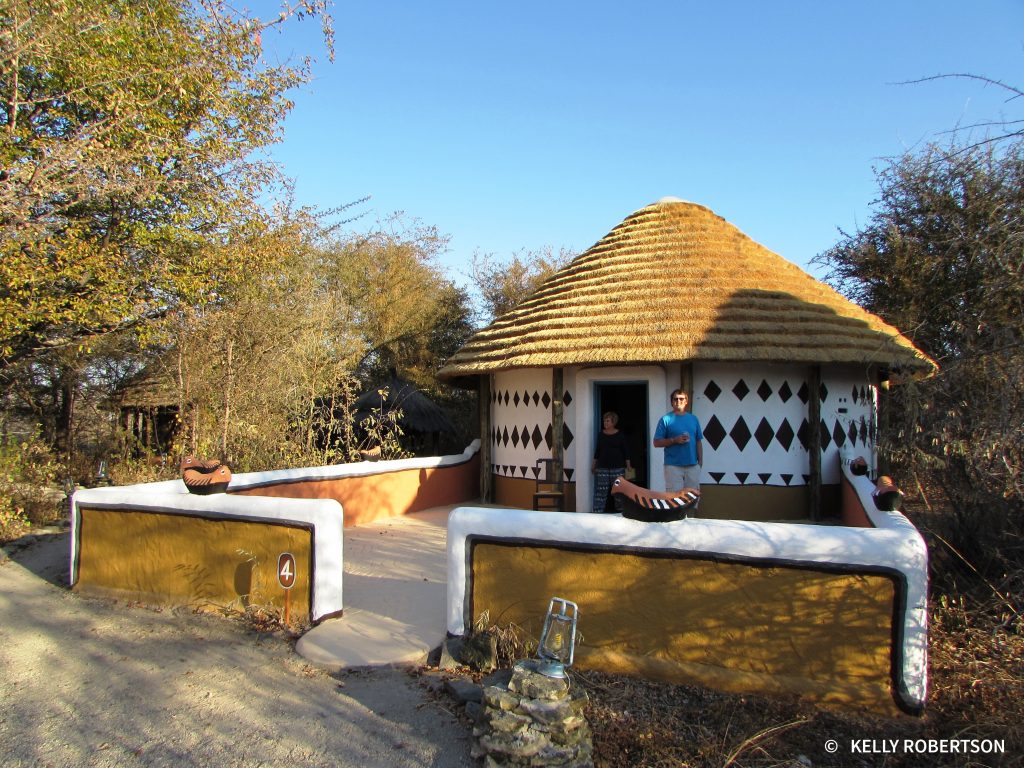 We strolled through the property, meeting and cherishing each of the impressive, ancient baobabs which stood in that space. We felt a comforting calm in their presence there. The sunset witnessed with these giants in the foreground was a spectacular show of orange and pink. Cost of camping: BWP49 per person After an impressive breakfast at the Planet Baobab restaurant and a little route-advice-sourcing from a resident guide there, we were off to seek out Kubu Island, a place which has been on my travel bucket list for years since encountering the mysteriously dreamy images and stories about it in travel magazine articles and on travel documentaries. It is said to have a tangible presence, and that the silence and vastness found there in the middle of the desert like flatness is something close to spiritual. I had always wanted to find out for myself.

I felt it and was in awe of the unique and remote outcrop in the middle of nowhere. A place of contrasts and whispers. Not everyone in our group was too taken by it and Graham especially felt it had been hyped up too much in the stories about it which is fair, but I think it’s a destination every African travel lover should see once. The longest stretch of bumps and anticipation

The route we selected to get to the island took us on 120kms of bumpiness on the A3 from Gweta to Kubu. With dust as our constant companion and thorny branches scratching at our cars with sharp fingernails, we navigated the narrow paths past villages and through bush. We passed at least 3 settlements along the stretch, complete with livestock and some crops growing out of the dust. It stopped me in my daydreaming and set me in a state of respect for the resilience of mankind, seeing those few people making that harsh environment home and thriving in it in their own ancient ways. We would have thought nothing could survive there but those faces proved us wrong.

We were not mentally prepared for the rough nature of that route and in our minds it was going to be a quick drive to our camp. 5 hours later we arrived, a bit hot and bothered and mildly disappointed because we seemed to just stumble upon Kubu Island. In the articles we’d read and videos seen of the arrival to Kubu, the island appears like a dream amidst the white sands. We kept expecting that to happen and the anticipation was thick. But unfortunately the route we drove took us around the back and we didn’t have that “ah” moment.  Still, the island beckoned to us and we opened our eyes and minds to her. 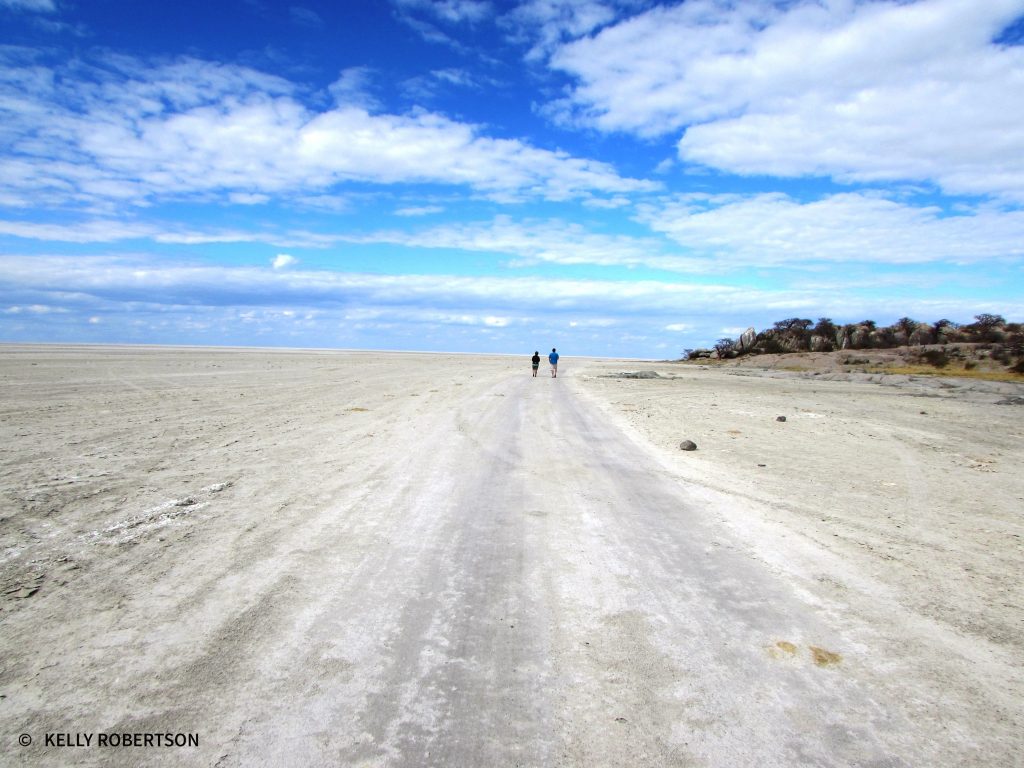 An eerie mysticism grips the island which juts out of the endless salt pans beyond it. The vast, flat landscape shines 50 shades of white in the sunshine and the craggy rocks of the island contrast against it, punctuated by baobabs and African chestnut trees. Once I was in it and its quietness and saw its character, I understood it. Kubu draws us into it.

We chose our camp spot on the island, with the rockiness to our backs and the salt pans before us. The campsite is community run and there are no formal sites or numbers to the sites. In the evening a gentleman came around to check our bookings and sign us in. I liked the informality and the system seems to work. There are also no ablutions and all rubbish must be taken away with visitors when they leave. Before setting up our camp we went exploring on foot.  We strolled around the perimeter of the island, on the crunchy salt pan sand and took it all in. The contrast of white sand that stretches on as far as the eye can see, against blue sky and the rocky island and its trees against it is mesmerizingly unique. Walking on the sand is completely captivating too. It’s almost spongy in texture, with moisture just below the salted, cracked surface which makes for brilliant footprint art. Our night was pre-empted by a blazing sunset, swirling above the whiteness of that setting. I walked out towards it, feet crunching on the salt and wind blowing a warning at me to not be out too long, but I never caught up with that sun. Our night was spent around a crackling fire with some red wine and calmness taking over. Chasing sunrise on the Makgadikgadi Pans

As morning broke my Dad and I were up and at it, chasing that sunrise. It was the most magical morning. We were alone in the whiteness and the light gently woke all the elements of that scene.

We walked out as far as we could and looked back at the island- its baobabs taking sentry forever and making for a beautiful view. 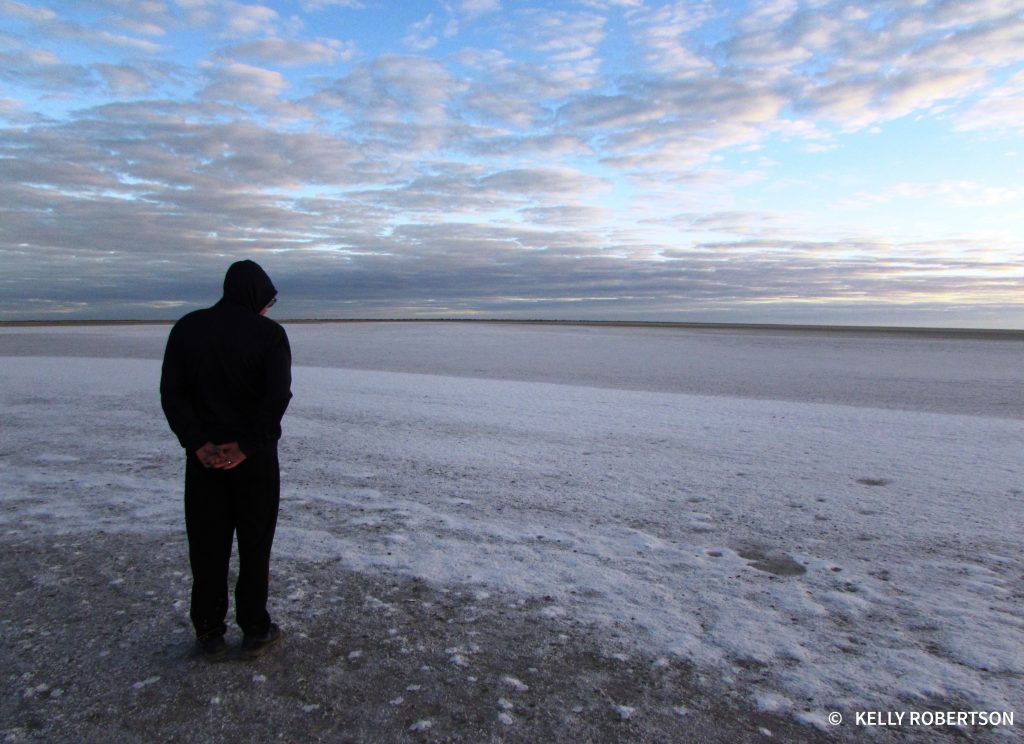 We came across multiple animal tracks, amazed that anything could survive out there with only salt and sand to be found. Nature is incredible. We noted cow prints, donkey, small buck tracks, cat and even elephant tracks crystallised in the salt. I would have loved to see an ellie making his way through that white wonderland, adding yet another contrast to the setting. The salt got thicker and the ground got whiter the further out we went and it tasted like proper table salt on the tongue. Kubu Island and its pans are where the soul can go to quieten and where you can really breathe.

Cost of camping: P100 per person per night We drove the 4 hour stretch to Khama Rhino Sanctuary, beginning with some fantastically smooth stretches of the pans under our big tyres and it felt awesome. We hit the tar with the sinking feeling that our adventure was moving towards its end. 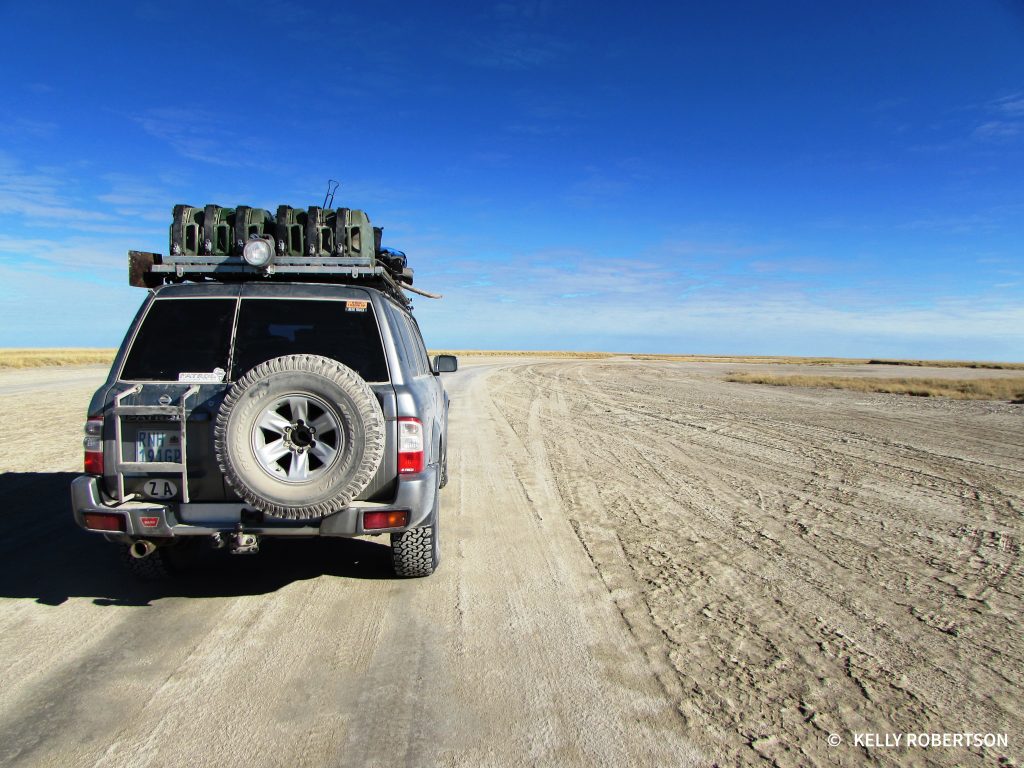 It was good to get back to Khama again though. It’s a convenient camp with a wild heart to overnight at, either on the way into Botswana or heading home and out of it.

We setup at our final campsite of our tip, at big stand number 9, and made jaffles for lunch on the gas under two African Chestnut trees (now familiar favourites since meeting them at Kubu too.)

We were still “Kubu Dust Monsters” so showered the sand off us before heading out on a game drive afternoon. 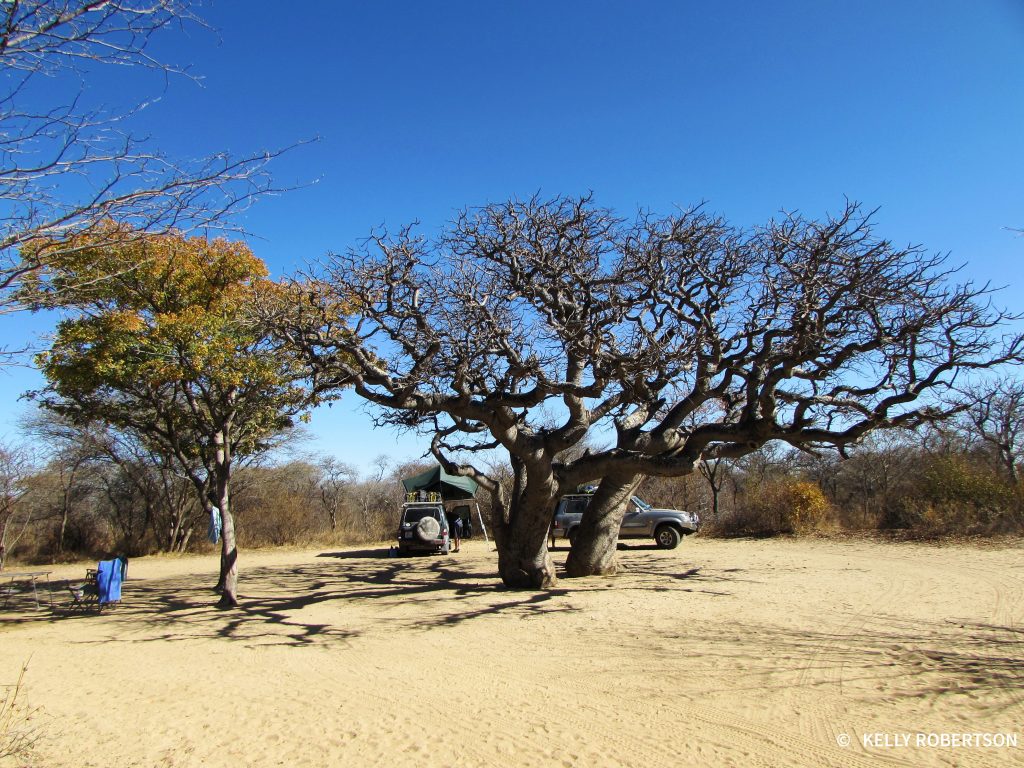 We’ve always been extremely lucky with sightings at Khama, and anyone who takes the time to drive its roads and sit at its pans on a visit will be rewarded with the same. Our first stop was at the bird hide where familiar feathered characters seemed super-sized. The food must be good at Khama Rhino Sanctuary. Some local residents like the grey go-away birds,  bright crimson breasted bush shrikes and guinea fowls let us watch their daily movements from our hidden lair.

Malema Pan was next on our route with lovely giraffes saying “Gooday” along the way and a rhino mother and calf spotted in the distance.  We also glimpsed proud and beautiful gemsbok and little funny warthogs going about their business as we drove.  It’s the smaller of the waterholes in the sanctuary and there wasn’t much action at it so we moved on to our favourite and ever abundantly populated Sua Pan.

There we happily sat until sunset while the wildlife came to us and entertained us for our last big show. During the leisurely hours, 12 different rhinos came down to drink and grace us with their presence. The army guards arrived to count and monitor them while we were at the water, proving how well protected the grey giants are in that place.

Some quirky characters made us smile at the waterhole too, including a black backed jackal that seemed to be a bit down on his luck. He was scraggly, skinny and mangy looking and he was missing a tail. He snoozed in the sun but the poor chap hardly got any rest as various animals walked past him and took it upon themselves to try and chase him off the path. We were impressed with his ability to fall asleep so soon after each irritation though and hope he got stronger in the following weeks. 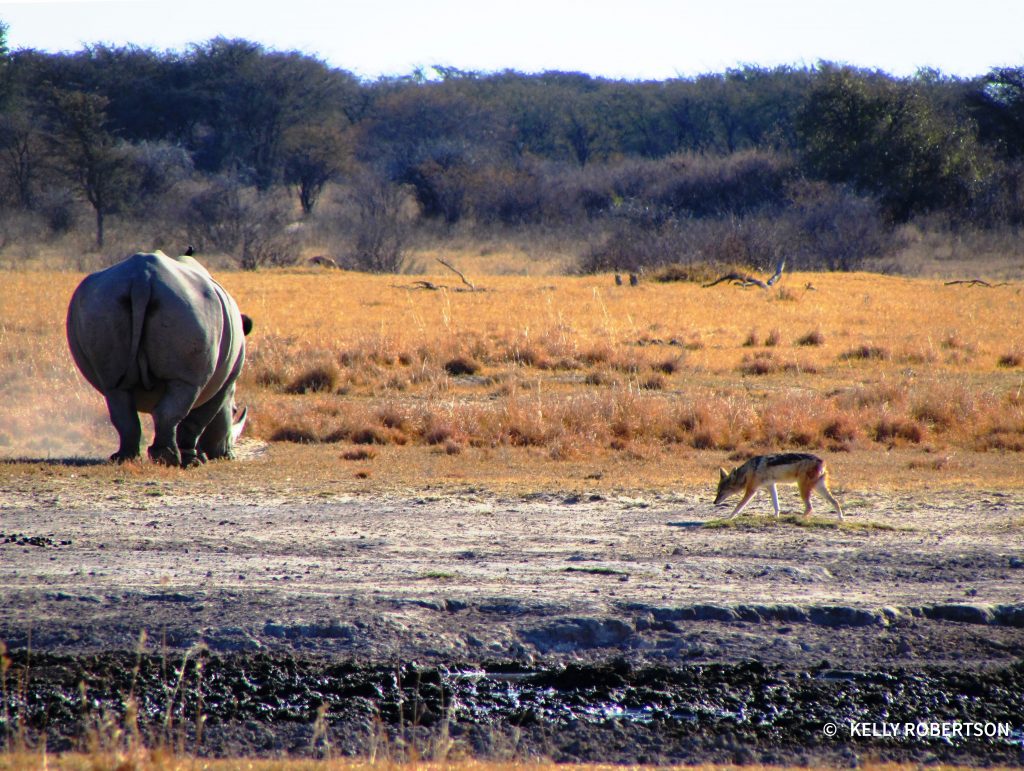 Another favourite of ours was the gathering of 6 white backed vultures that seemed to be enjoying a mud bath spa day at the water’s edge. They periodically hopped around, chased each other into different positions and suntanned between splashes in the shallows. They reminded us of the vulture from Disney’s “Jungle Book” and we wouldn’t have been too surprised to hear them break out into the theme song, “That’s what friends are for”. 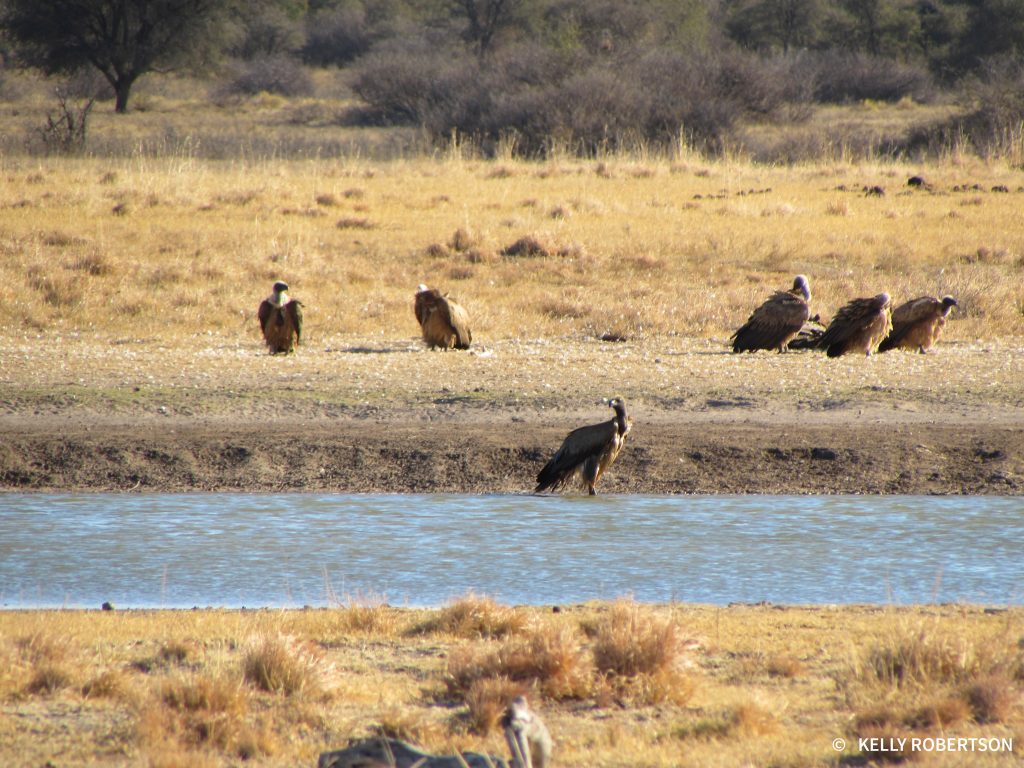 10 ostriches made quite the entrance when they arrived on the scene but their awkward drinking positions took away their grandeur soon enough as they bent and threw back their heads in sequence downing shots of water while keeping a beady eye out for trouble. We watched them leave and through binoculared eyes we were fortunate to see one male fling into a choreographed mating dance with flair. He was successful too as the female succumbed to his efforts and we saw them mate before abruptly parting ways. Just before the sun disappeared we were spoilt to visits from blue wildebeest, zebras, springbok, impala and a huge flock of guinea fowl who came down for a night cap before going straight to bed. We too fled the scene to find the last Botswana beef steak dinner of our trip at the restaurant.

Cost of camping: P108 per person per night 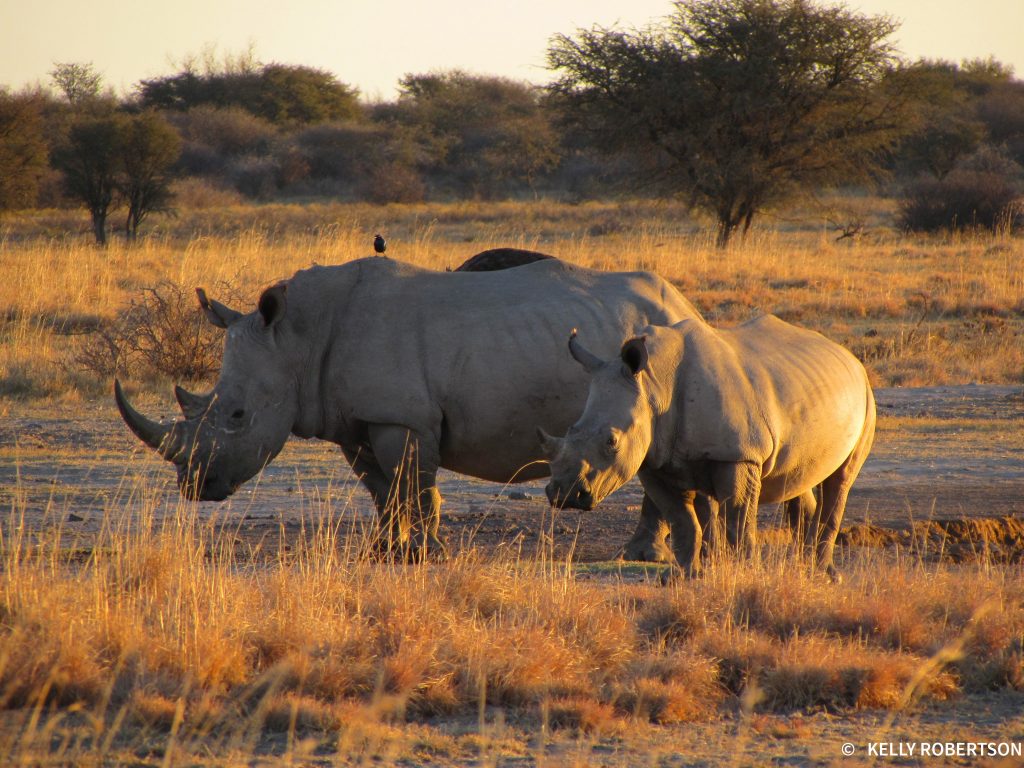 Yes, camping in Botswana is a wild affair. Living amongst the wild things puts our meagre humanity into its little place in the hierarchy of nature and lets us appreciate its wonderment completely.

We can’t wait till our next opportunity to explore more of Botswana’s wild places. Read more about our route, tips and an overview of the entire trip in part 1 of this blog series and then all about our first 9 days at Nata, Elephant Sands, Ihaha, Savuti, Linyanti and Dizhana in part 2,  part 3, part 4 and part 5.