A day in Hluhluwe-Imfolozi Game Reserve

A day spent in KZN’s wilderness fills the heart, and the camera memory card.

In the spring of 2014 Graham and I got our first wild-taste of KwaZulu Natal’s pride and joy game reserve: Hluhluwe Imfolozi.  We spent a glorious day driving its green and hilly wilderness routes and my eyes were uncontrollably wide as I tried to take in every moment, sight and feeling this new terrain and bush-paradise was showing us. My heart was also full with that happy appreciation that is so emotionally linked to precious time spent in the bush. 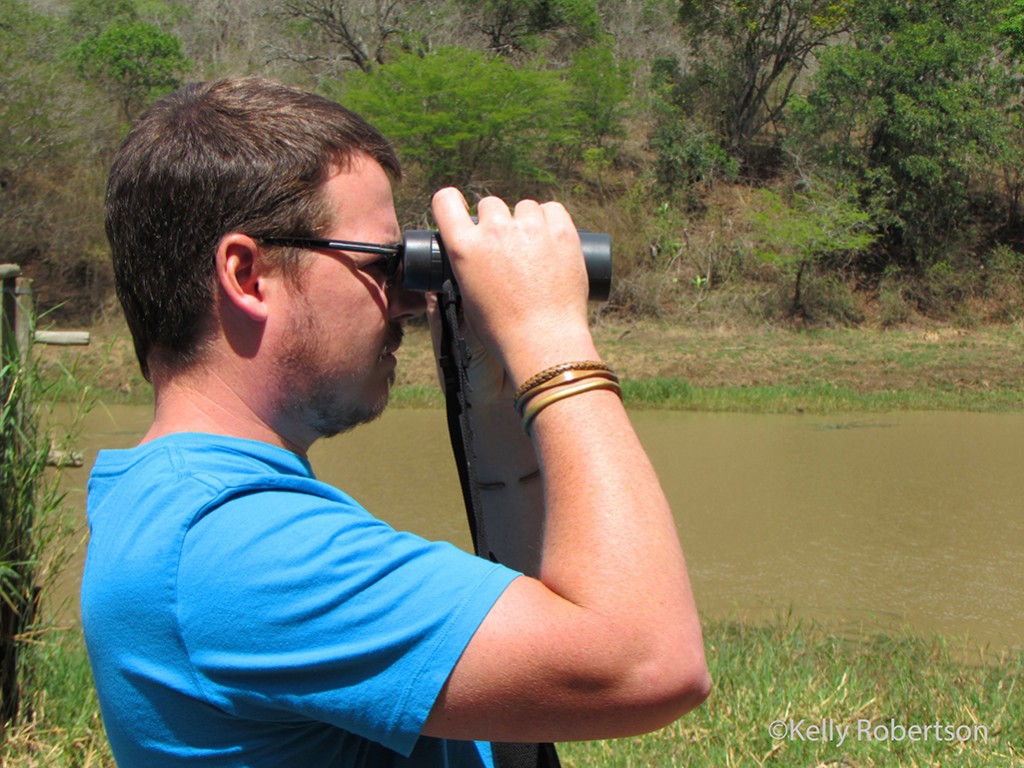 I was struck by how dramatic the landscapes were and the almost lumo-green shoots of spring life painted our views. The wildlife, especially Hluhluwe-Imfolozi Game Reserve’s famous rhinos, were reveling in that greenness, munching the sweet new grass and bouncing around in glee, to our delight and their own. 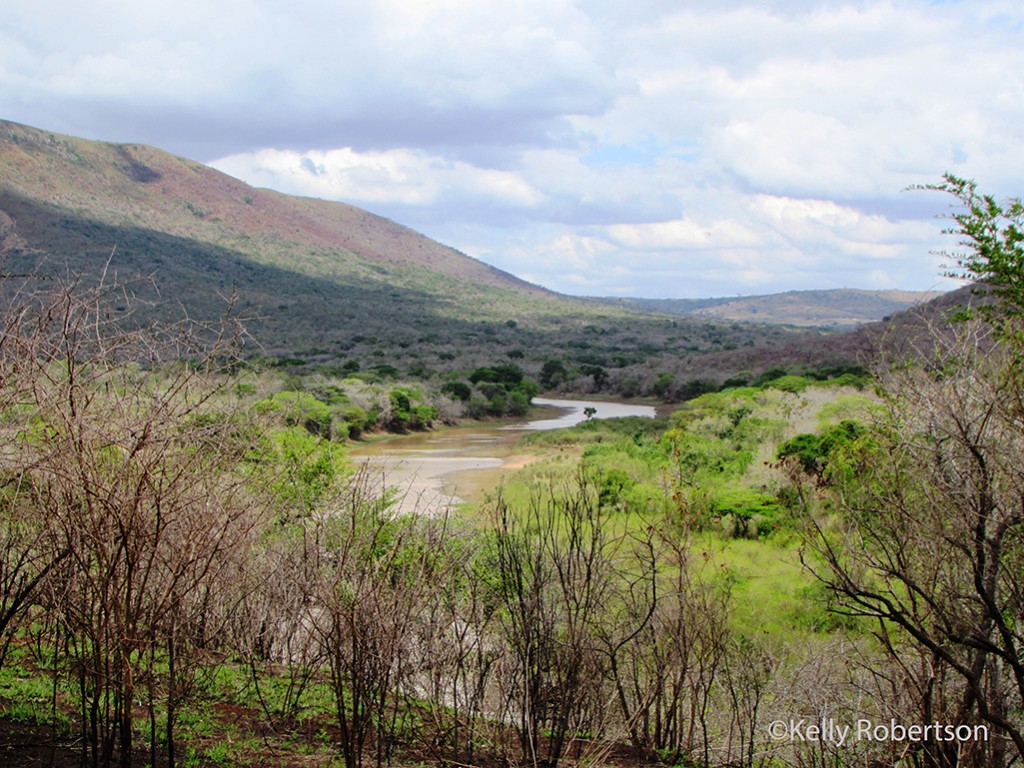 I was so aware of the ever changing type of scenery we encountered as we followed the roads and the map to lookout points, picnic sites and just generally explored. We wound through grasslands and savanna and then up steep rocky hills and down again, giving us incredibly varied perspectives and views of the wilderness.

We also encountered many of the reserve’s animal and bird residents, some who were quite happy to stare us down as we did them and pose for the camera.

Here are a few photo memories of our day trip game drive through the northern part of Hluhluwe Imfolozi Game Reserve: 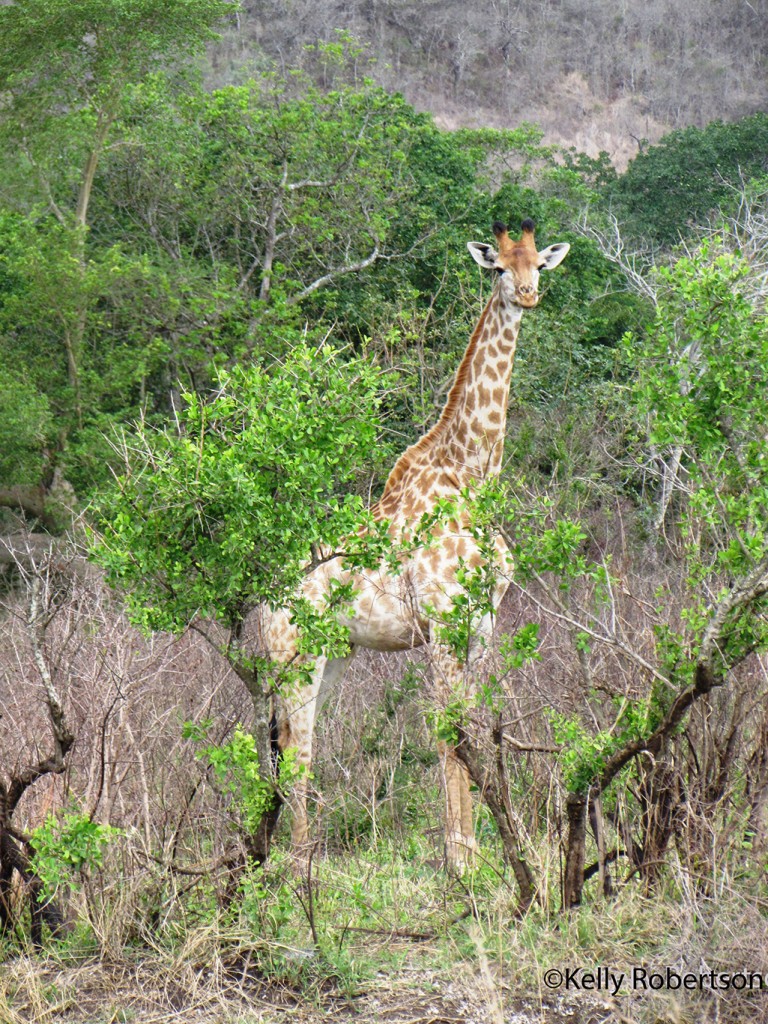 A staring competition with a pretty giraffe 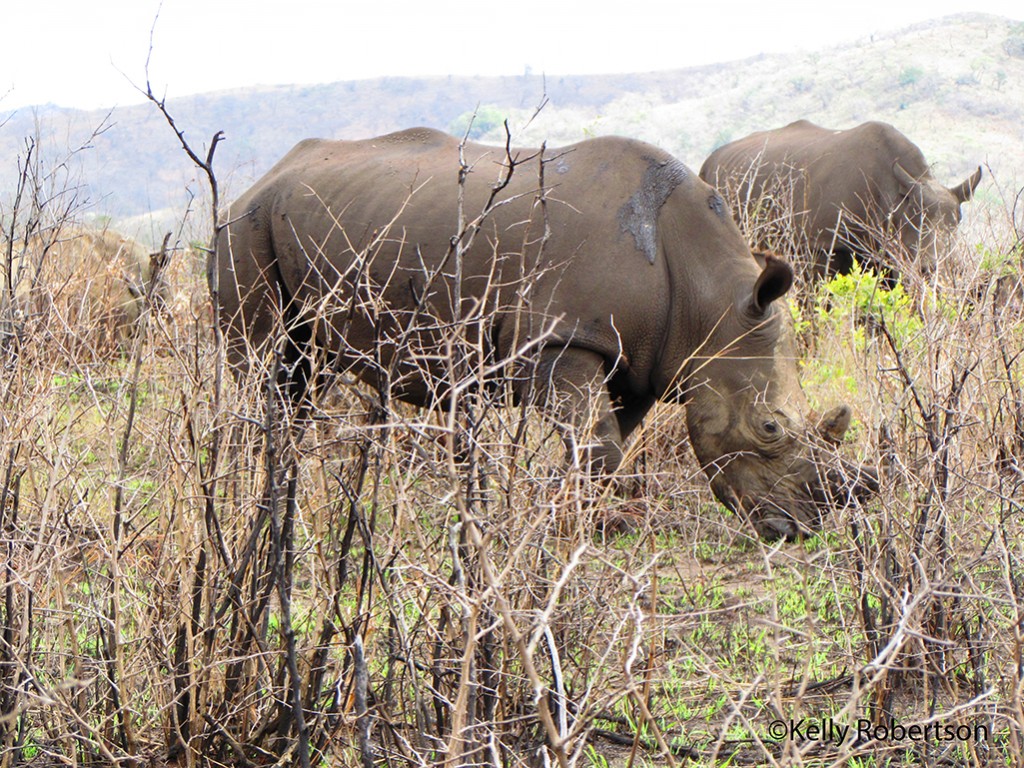 One of our many precious rhino sightings 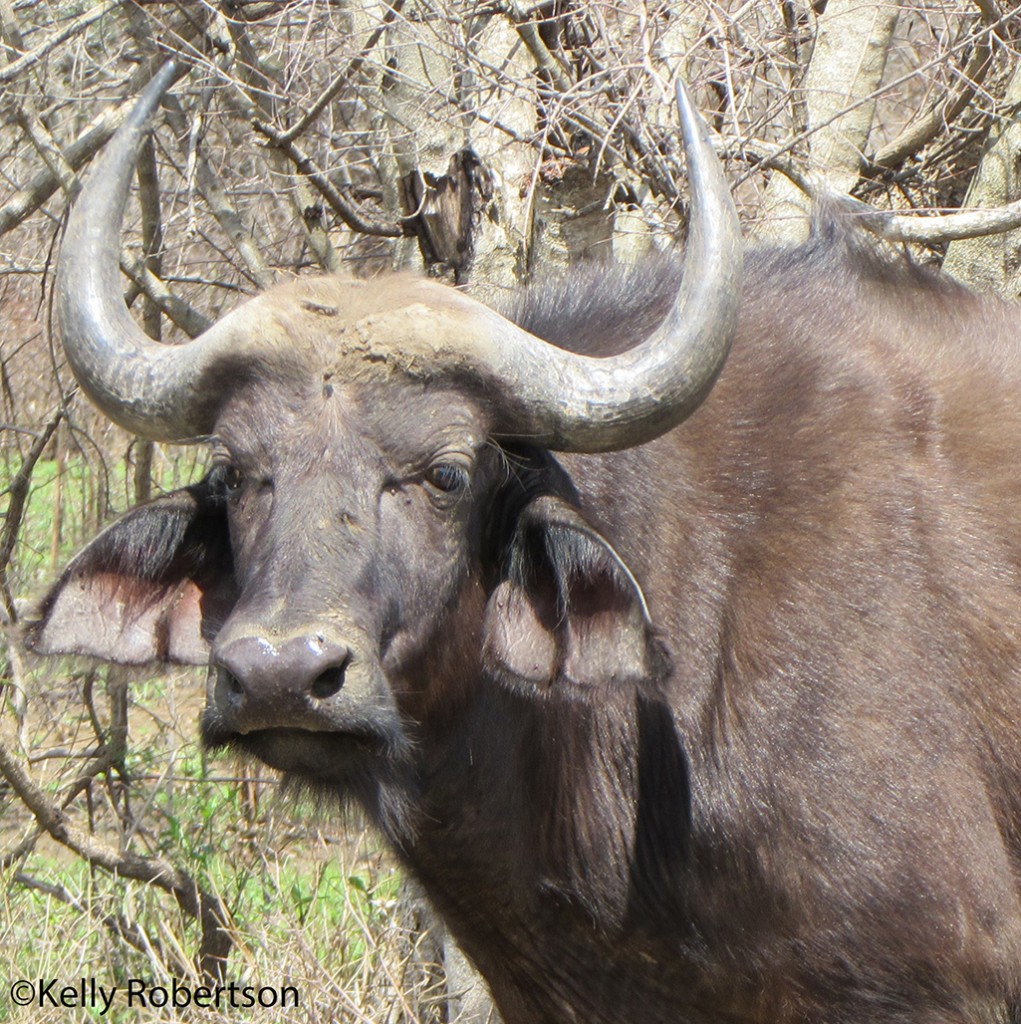 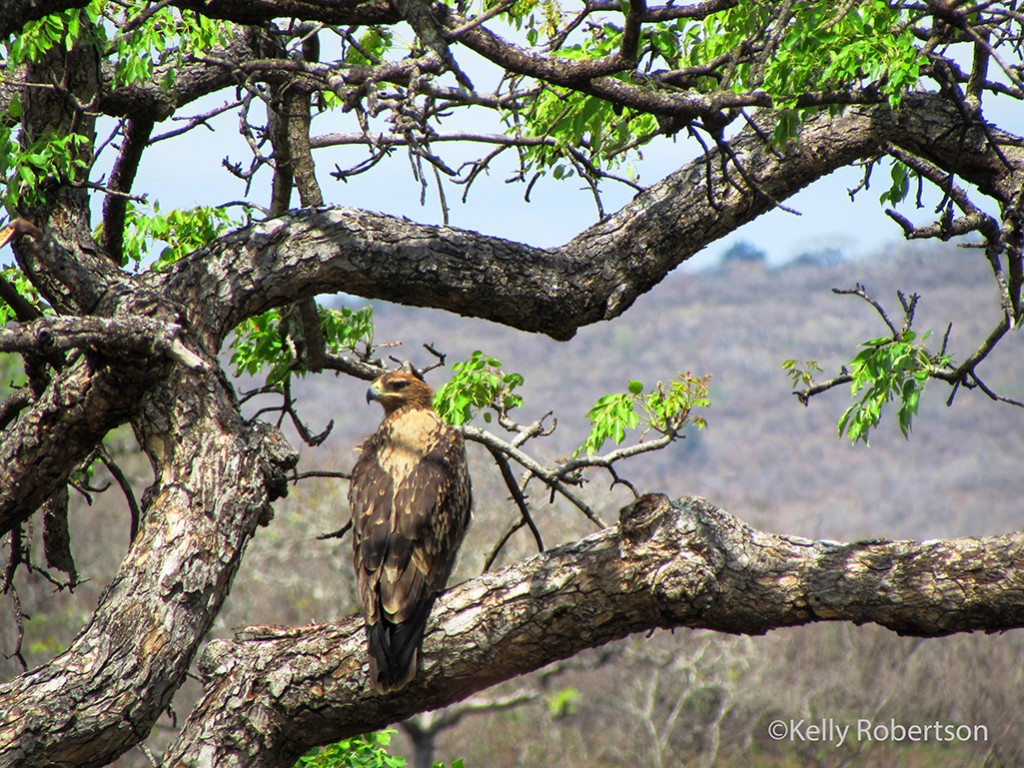 A Juvenile Jackal Buzzard or possibly a Juvenile Tawny Eagle. Can any birders help with an ID? A black and white parade 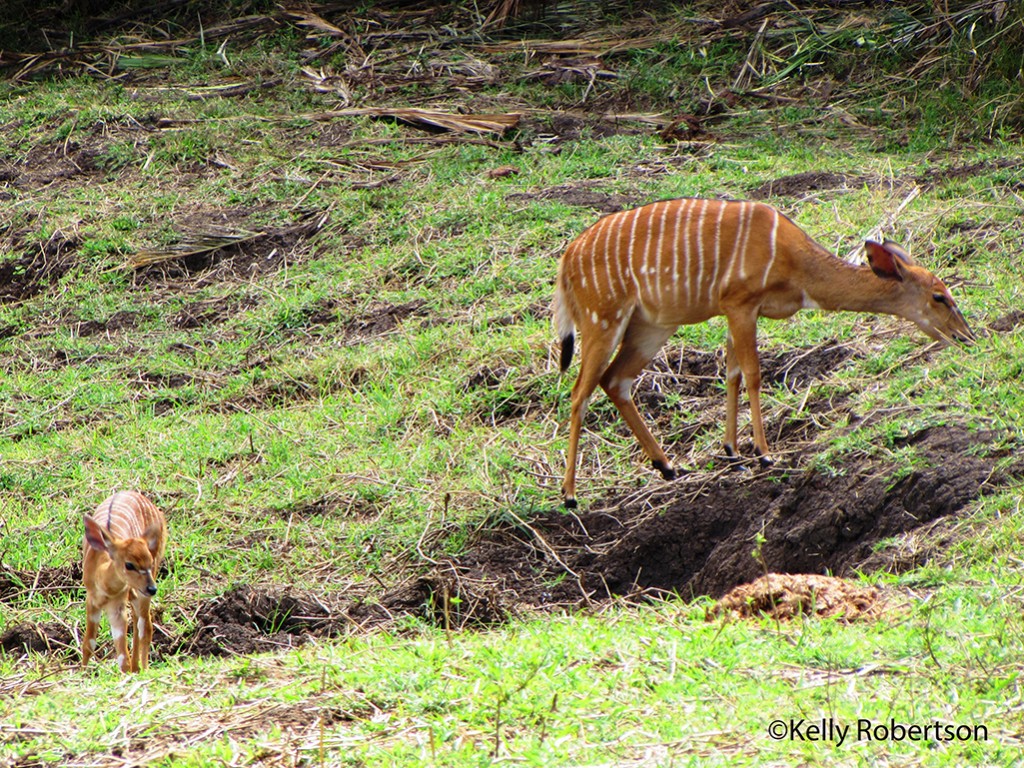 A nyala mom and baby pair. There are many nyala in the reserve. A Crowned Hornbill against a brilliant blue sky backdrop 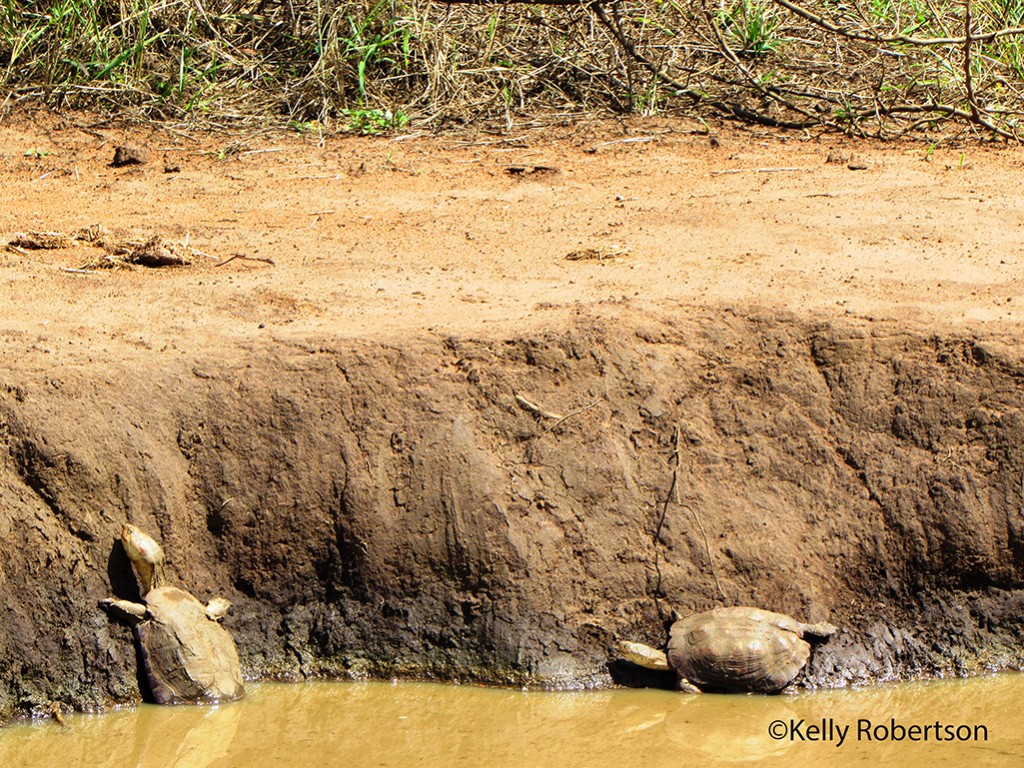 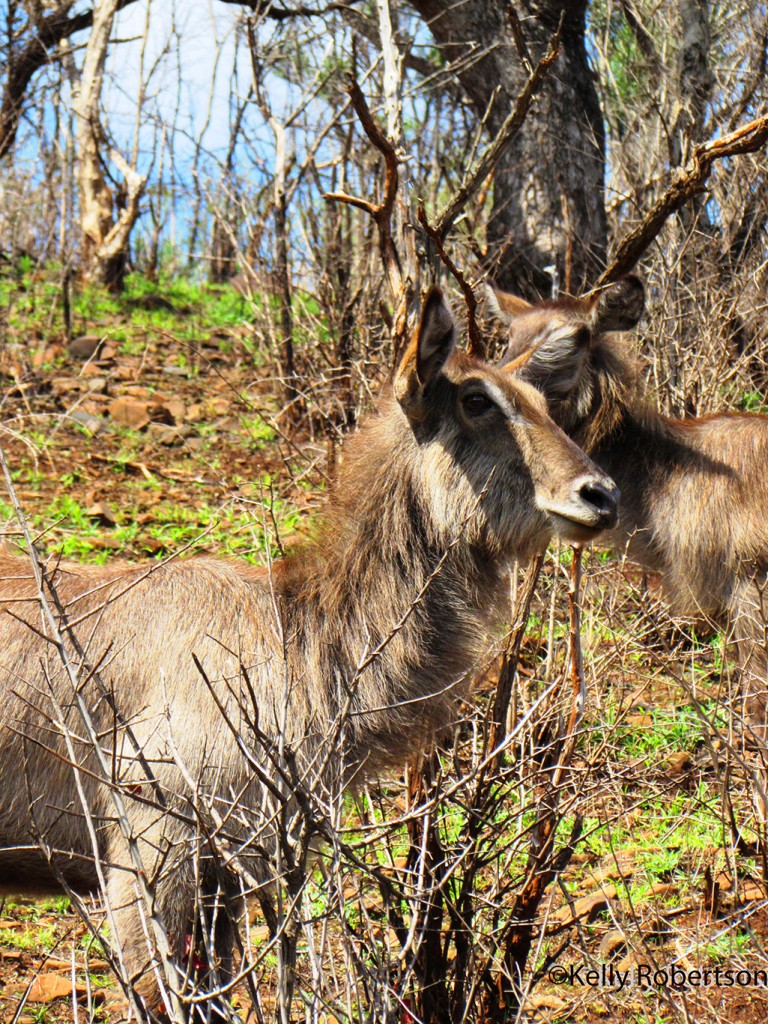 Waterbuck on a hill

What’s the difference between Hluhluwe and Imfolozi?

We entered the park at the Memorial Gate, which is in the north of the park and closest to Hluhluwe town. This was the nearest gate to us as we were staying at Umziki Pan near False Bay and Isimangaliso Wetland Park. This part of the reserve is the Hluhuwe region. Being new to the game reserve I’ve since been curious about what the difference is between references to the game park as “Hluhuwe” and others referring to it as “Imfolozi”. After some interesting reading up on the park’s history and its layout I now get it.

According to KZN Wildlife  Hluhluwe and iMfolozi Game Reserves were originally 2 separate wildlife areas, formally established as game reserves in 1895.  Today they are joined along with the Corridor Reserve which was proclaimed in 1989.  Hluhluwe-iMfolozi Park covers some 96 000 ha and is easily linked together by a network of dirt roads.

The Hluhluwe section in the north is where we were and is “characterised by towering grassland hills and diverse terrain and vegetation and is exceptional for its rich variety of bird and animal life.” This exactly describes the ever-changing environment we found ourselves in that day.

KZN Wildlife describes the iMfolozi section in the south as being “characterised by wide open spaces and is a natural treasure store of fascinating fauna and flora.” Species include the Big Five, cheetah, wild dog and over 300 bird species. 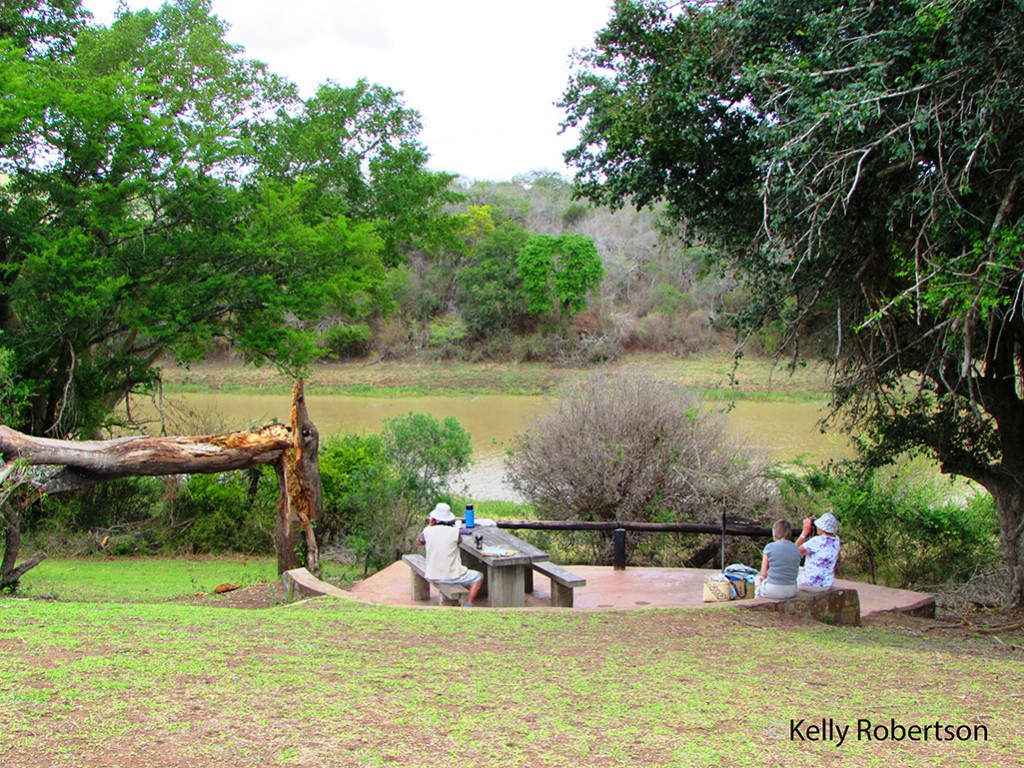 What’s in a name?

Hluhluwe is named after the umHluhluwe or ‘thorny rope’, a climbing plant which is found in the forests of this area.

Imfolozi is named after ‘uMfula walosi’ or the ‘river of fibres’. The aerial roots hanging from the sycamore figs where the Black Umfolozi and the White Umfolozi rivers meet give the area its name. A day outing in the bush

A little history about the reserve’s role in rhino conservation

We were so blessed to have seen numerous white rhinos on our game drive through Hluhluwe-Imfolozi. We are constantly aware of the threat these sturdy, innocent giants are under. 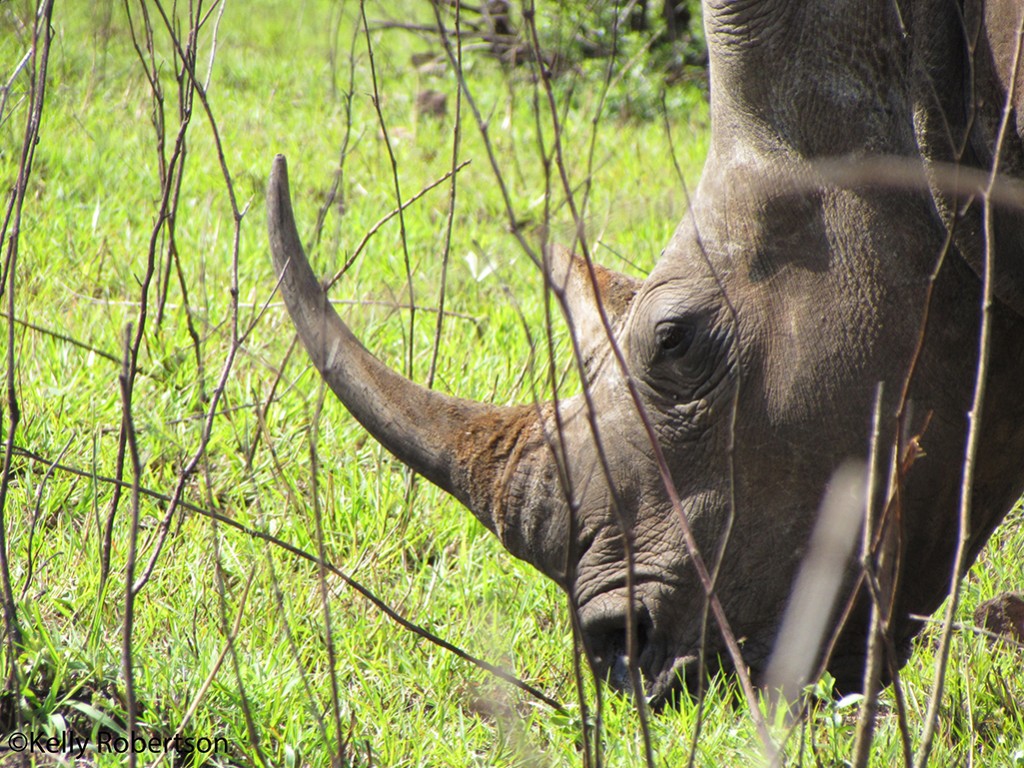 The reserve has been intrinsically connected to rhino conservation throughout its history:

The park is the birthplace of rhino preservation, breeding the species back from extinction (fewer than 20 rhinos worldwide in 1900 to more than 10,000 today). As the home of Operation Rhino in the 1950s and 60s, the Park became world-renowned for its white rhino conservation.[11]The Rhino Capture Unit of the park helped save the endangered White Rhino from the brink of extinction. Today there are more than 1,600 white rhino in the reserve and hundreds of the animals have been moved to game reserves around the world.[6] The success of this programme has recently been compromised by the increase in rhino poaching within the park. This recent threat has not only become a great concern for the park, but for rhino conservationists countrywide We will return… very soon

A day trip wasn’t nearly enough and that northern KZN game reserve has been calling to us to return and explore more of it ever since our first visit. I am giddy with excitement as we have just confirmed plans to heed that call of the Hluhuwe-Imfolozi wild and this time we’re going into it on foot. Next month we are off on one of the guided wilderness trails offered by  KZN Wildlife where we will immerse ourselves in the southern Imfolozi  wilderness part of the park and become part of it. 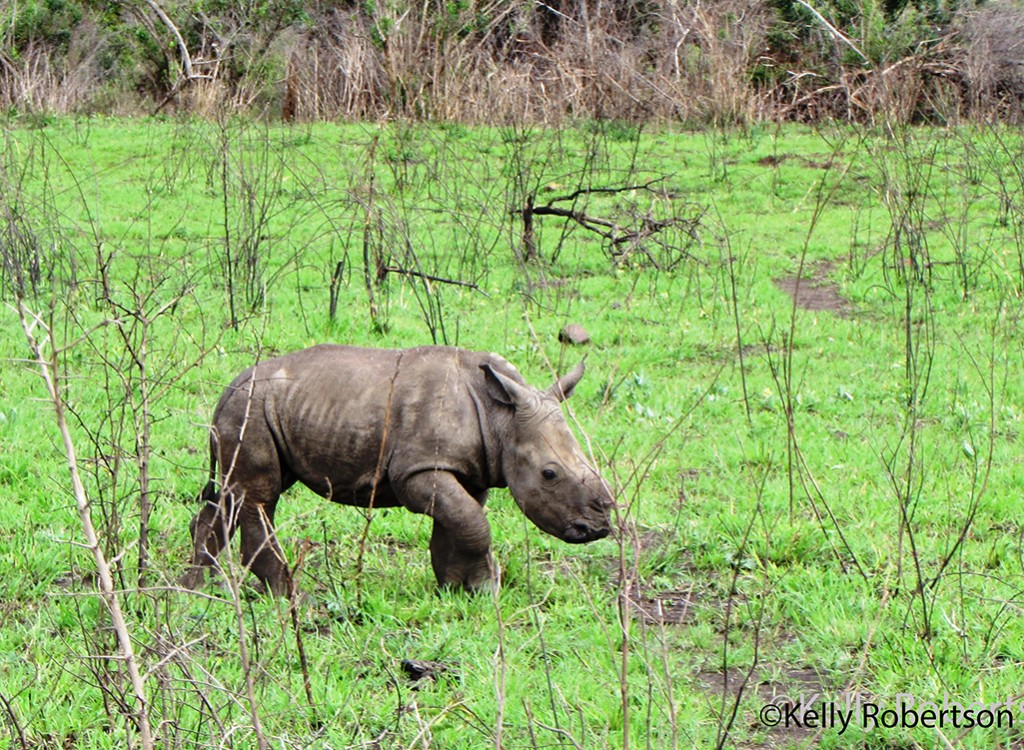 More info on the trails and game reserve:

Joining it and seeing the post, trip reports and pictures from previous trails there inspired us to push an Imfolozi trail up to the top of our travel-bucket list.

We’ll be enjoying all things wild and wonderful on a 2 day weekend trail soon and can’t wait.

More info about the wilderness trails and the reserve on the KZN Wildlife website.

← On our Bicycles at Shongweni Dam
Snow Seeking in Underberg, KZN →

Please check your feed, the data was entered incorrectly.